There is a difference in iconographic appearance and description between the Sakya and Gelug forms of the deity. For the Sakya version both figures hold a bone stick (fused spine) and and a skullcup. The gelug version differs with the female consort where she holds a sheaf of grains and a vase. Sometimes the vase is placed in a skullcup. In the Nyingma tradition there is a practice called the Lama Gongdu. It has several heruka deities with secondary figures for esch. One of the Heruka deities has four skeleton couples in four different colours with various hand attributes. Although similar in appearance they are not related to Shri Shmashana Adhipati.

There are always exceptions from the standard iconography. Examples: standing on a corpse.

"...the two, Shri Shmashana Adhipati, Father-Mother, with bodies white in colour and having a very frightful skeleton form shining forth with rays of light; staring eyes, curled tongue; faces with bared fangs; the right hands hold aloft to the sky sticks of dry bone, and the left hold skullcups of blood to the heart - drinking; a crown of five dry human skulls; twisted jewel earrings; with a lower garment of various silks; with the two feet in dancing postures standing in the middle of a blazing fire of pristine awareness." (Sakya Kangso).

"...in the middle of the wind above an ocean of blood is the foundation of a great land of earth, and a mountain of skeletons, above, inside a four-sided mansion of skulls, a lotus and sun seat stands Shri Shmashana Adhipati, Father-Mother, surrounded by a circle of immeasurable worldly and non-worldly dakas." (Buddha Lakshmi).

"...the two, Shri Shmashana Adhipati, Father-Mother, with a body white in colour and shining forth rays of light, having the form of a very bright skeleton, with two hands, staring eyes (three splendid and alluring eyes), curled tongue and bared fangs. The right hand holds aloft to the sky a dry skull stick and the left a blood filled skullcup held to the heart and drinking with the mouth. Standing in a dancing manner with the right foot raised and pressed against the thigh of the extended left leg. Adorned with lower garments of various silks, a crown of five skulls, jewels and earrings. The Father-Mother dwell in the middle of a blazing fire of pristine awareness surrounded by an immeasurable host of worldly and beyond worldly dakas." (Sanggye Rinchen). 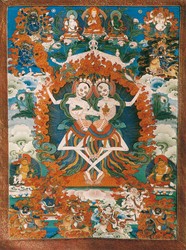 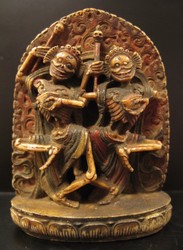 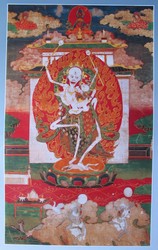