Following after the use of footprints, handprints begin to appear and be incorporated into the composition of paintings. Although somewhat later, they become popular with the Gelug Tradition in the 17th century.

Although with a different meaning, handprints are also found on the backs of paintings placed there as a blessing - as part of the sanctification of a work. This manner of blessing appears to have been done by all traditions of Himalayan Buddhism but with the very different intention than that of the footprints placed on the front of a painting.

The Nyingma Tradition appears to have adopted the practice very late, possibly following the example set by the 5th Dalai Lama and Desi Sanggye Gyatso in the 17th century. So far there are no examples on the Himalayan Art Resources website of Sakya footprint compositions, or any affiliated schools. Historically it is a Kagyu tradition supported by early Kagyu writings later taken up by the Gelug hierarchs and painters. 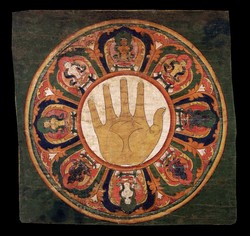 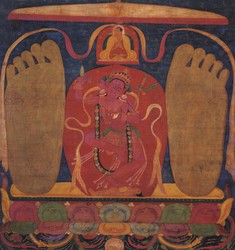