Simple Design & Personal Use. The smallest pegs (purba) are often made of metal such as silver and can be less than half an inch in size up to several inches in length. These pegs are intended to be wrapped in cloth or placed in a small amulet box or container and worn on the body either around the neck, the upper arm, or around the waist.

Pegs for personal use which are sometimes worn on the body, tucked into the belt or sash, and used for meditation and ritual use are generally plain in appearance and thin in girth. These pegs are easy to hold and not unreasonably heavy. As a decoration, sometimes they will have one or three wrathful (raksha) heads. For Hayagriva practitioners they will have a horse head at the top. A more elaborate Hayagriva peg might have three horse heads. Most pegs are of this simple type of design and made from metal. Meteorite iron in general is a preferred material for manufacture. Depending on the ritual application pegs can be made from different types of metal, a variety of different types of wood, or other mediums as stipulated in the various ritual texts.

Decorative Design & Ritual Use. The decorative metal (sometimes a wood medium) are for presentation on a shrine, an elaborately arranged table in front of a teaching throne, or for three-dimensional mandala creations and use. These pegs are often too heavy and too large to be used for meditation practice or the performance of specific gestures (mudra) while holding the peg in the two hands.

Performance & Dance. The very large and colourful wood pegs in a Buddhist or Bon symbolic style are generally used for performance rituals and 'cham' dances of various types. Other decorative wood pegs are used by tribal groups for a variety of purposes and shamanic rituals.

Decorative & Display. There are examples of very large pegs that can be as tall as several feet in height. These objects might have been created as mandala pieces or simply as decorative objects for temples and shrine rooms. The majority of over-sized pegs are of Chinese construction and used as decoration in Tantric shrines and protector deity temples.

The peg (kila) is a ritual object that can be used along with almost any deity, generally semi-wrathful or wrathful. Even some forms of the female deity Tara have specific peg rituals to accomplish certain goals or tasks. The peg is a utilitarian object originating with the construction of Buddhist mandalas as described in early Indian Sanskrit texts. 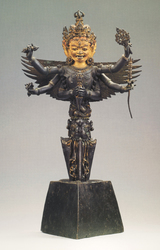