The Consequences of Turning Against a Friend.

In a blessed region near the snow mountains of the Himalayas, the bodhisattva lived alone in the form of a large monkey. Although born into a lower state, the bodhisattva had not lost his awareness of a spiritual life and was kind and patient, and possessed of a sweet yet firm nature. He lived like an ascetic, sustaining himself on nothing more than leaves and fruit. He treated all the creatures he encountered with compassion and kindness.

One day it came to pass that a farmer, having gone in search of a stray cow, became completely lost. Unable to determine his location using a star map, the farmer wandered at random and eventually entered the forest of the great monkey. Searching for food, the man noticed a tree laden with fruit on the side of a rocky slope. Having reached the tree, as he was standing on a branch grasping for fruit, the branch suddenly snapped and he fell into a dark pool at the bottom of a chasm. Surrounded on all sides with steep rock walls, there was no escape. 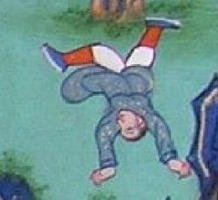 The man had been in the dark chasm for several days before the great monkey, gathering fruit from the same tree, noticed the farmers emaciated body lying below. The monkey called out to the farmer who responded by begging for help. The monkey bodhisattva, having deep compassion for the man's situation, started to descend the rock face. Once he reached the bottom of the chasm he had the farmer cling to his back as he climbed up out of the deep hole. Once they reached the top, the monkey was exhausted from carrying such a heavy weight and asked the man to guard him as he rested. The farmer gave the monkey his word that he would protect him as he slept. 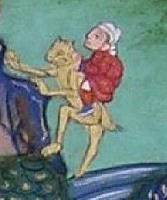 Although grateful to the monkey, the man began to think that if he were to kill the great beast that he would then surely have enough meat for his journey home. The man became so caught up in this dark greed that his sense of gratitude, as well as his knowledge of right and wrong, was utterly destroyed. Ignoring his frailty and driven only by his desire to kill, the farmer then took a large stone and struck the head of the bodhisattva monkey. Not having the strength to deliver a fatal blow, the rock merely bruised the monkey's temple. Abruptly awoken and startled, realizing the wicked act the man had just attempted, the monkey burst into tears of sadness and pity. 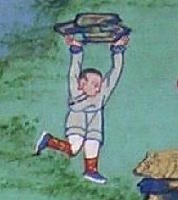 Never-the-less, still feeling compassion in his heart, the monkey led the man back to civilization. As soon as he was left alone, filled with feelings of remorse, the farmer was suddenly struck with a hideous attack of leprosy. His face became covered with putrid sores which spread to the rest of his body until he no longer looked human. 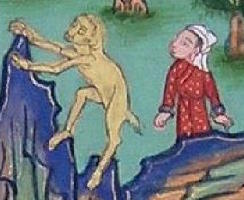 Banished from society, one day as the disfigured man was wandering through the forest, he encountered a king who was in the midst of hunting. The king asked what kind of demon or ghoul he was. Shocked that the ghoul was actually a man, and a farmer, the king then inquired how he had fallen into such a wretched state. The man confessed his treacherous actions againt the kindness of the great monkey. He explained that a deed against a friend is such a horrible act that the king should consider it his biggest enemy and that he should always look with kindness upon those who are kind to him.

Key Events in the Story.

1. The Bodhisttva was born as a large Monkey.

2. A farmer gets lost and falls into a chasm.

3. The monkey saves the farmer.

4. The farmer returns injury for kindness, but the monkey forgives.

6. Confessing to a king, the farmer regrets his actions.