The concept of bundling the three long life deities, Amitayus, White Tara and Ushnishavijaya, together as a set is a Tibetan construct. The three are the most popular and most represented longevity deities in Tantric Buddhism and art. (See the Health, Healing & Longevity Page).

Amitayus Buddha
"Bhagavan Lord of Limitless Life and Pristine Awareness with a body red in colour, one face, two hands and with two long eyes glancing with compassion on beings, gazing on the entirety of migrators; and a smiling face, wearing the complete sambhogakaya vestments. Above the two hands held in meditation is a long-life vase filled with the nectar of immortality; with the hair in tufts, adorned with silks and jewels, seated in vajra posture, the body blazing with the shining light of the [32] marks and [80] examples." (Sakya Tridzin Kunga Tashi, 1656-1711).

White Tara
"...with a hue white like an autumn moon - radiant like a stainless crystal jewel, shining with rays of light, one face, two hands, and having three eyes; with the conduct of having sixteen years of age. The right hand is in the mudra of supreme generosity; the left holds with the thumb and forefinger the stem of a white utpala to the heart with the petals blossoming at the ear. Representing the buddhas of the three times the single stem is divided into three, in the middle is a blossoming flower, the right in fruition, the left in the form of a bud; adorned with various jewel ornaments; having various silk upper garments and a lower garment of red silk; seated with the legs in vajra posture. The palms of the hands and feet each have an eye - the seven eyes of pristine awareness." (Sachen Ngagwang Kunga Lodro, 1729-1783).

Ushnishavijaya
"...Ushnishavijaya, the colour of an autumn moon, with three faces, white, yellow and blue and eight hands. Each face has three very large eyes. The first right hand holds a vishvavajra, second a white lotus with Amitabha [Buddha] residing, third an arrow and the fourth in [the gesture of] supreme generosity. The first left holds a vajra lasso, second a bow, third [in the gesture of] bestowing protection and fourth in [the gesture of] meditative equipoise holding an auspicious nectar vase; complete with silks and jewel ornaments, seated in [vajra] posture. Within the outer circle of the stupa, on the right [side of the chaitya], above a moon is Avalokiteshvara with a body white in colour, the left hand holds a lotus. On the left [of the chaitya], above a sun is Vajrapani, blue, the left hand holds an utpala with a vajra; standing in a peaceful manner and adorned with silks and jewels." (Jamyang Kyentse Wangpo, 1820-1892).

The images below are only a selection of examples depicting the Three Long Life Deities (tse lha nam sum), Amitayus, White Tara and Ushnishavijaya. 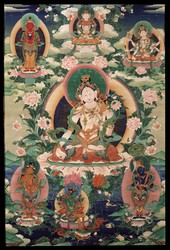 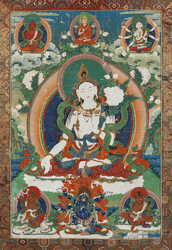 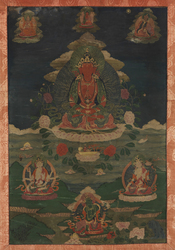 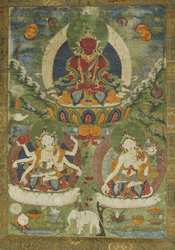 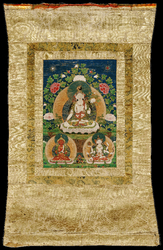 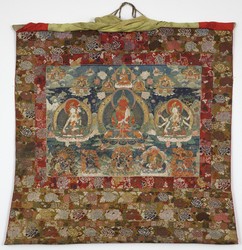 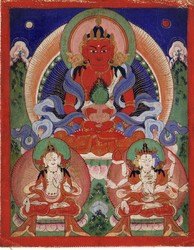 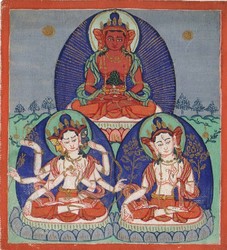 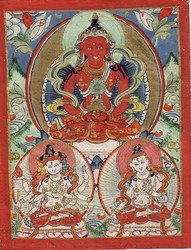 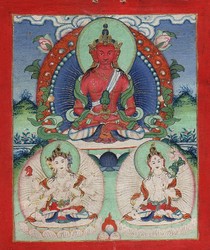 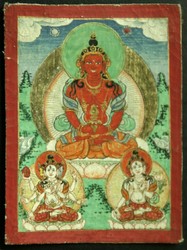