The Three Manjushri Embodiments refers to the three Eastern Tibetan teachers: 1) Jamyang Khyentse Wangpo, 2) Jamgon Kongtrul and 3) Choggyur Lingpa. They were each looked upon as being emanations of the bodhisattva/deity Manjushri and referred to as the 'embodiments'. In Tibetan Buddhism there are many groupings of teachers making reference to emanations and embodiments of Manjushri and it can be a little confusing with each tradition of Tibetan Buddhism having a similar but different selection of teachers referred to in a similar way as each of the other religious traditions.

The Choggyur Lingpa painting appears to be the earliest and executed in an Eastern Tibetan Kham style of painting. It has the cleanest brush strokes and the most carefully rendered portrait. Choggyur Lingpa passed away in 1870 so therefore the hand and foot impressions had to be created prior to that date.

The painting of Jamgon Kongtrul depicts him as an old man with white hair and wearing extra clothing depicted as a white short sleeved shirt. His face shows wrinkles and the actual hand prints display clear signs of serious arthritis with the irregular shapes and twisting of the fingers. Kongtrul passed away in 1899.

The Khyentse Wangpo composition is the simplest of the three employing blocks of colour and spheres to frame the various line drawn figures. The face and iconography is very basic with no attempt to show personality or reflect the age of Khyentse at the time of commissioning. Khyentse passed away in 1892.

The three paintings appear to be created by three different artists at three different times. The Choggyur Lingpa is likely to have been the first and the Jamgon Kongtrul the last. It is also important to mention that all three paintings have different brocade mounts. The sizes need to be confirmed and then also considered. Since the three reside in the same location it must be assumed that they came together at some point and then over time began to be considered a set, no doubt also because of the modern printing in publications, as religious cards and posters, all three side by side, stripped of the brocade mounts. 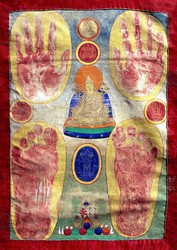 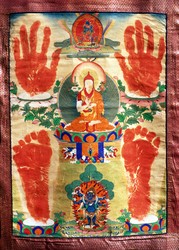 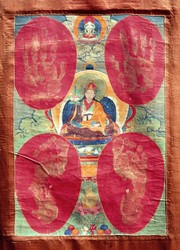