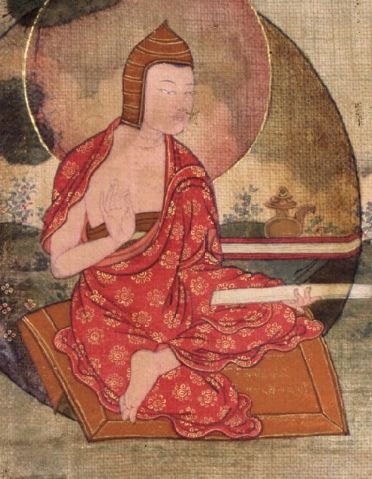 PART 7 (JA): The origins of the exegetical traditions of the tantric systems [6 CHAPTERS]

Now the manner in which the Tantras were preached is to be related. In regard to the Kriya-Tantra (bya ba'i rgyud) and the Caryā-Tantra (spyod pa' rgyud), the exposition of the ācārya Buddhaguhya (slob dpon sangs rgyas gsang ba) was pre-eminent throughout the Period of the Early Spread of the Doctrine. Translators, basing themselves on the expositions of other paṇḍitas, and having mastered the teaching of the ācārya Buddhaguhya, translated the Arya-Subāhuparipṛcchā?nāma-tantra, Sarvamaṇḍalasāmānyavidhīnām guhyatantra, the Dhyānottara-paṭalakrama and other texts, as well as a brief commentary on the Vairocanābhisaṃbodhi-Tantra of the ācārya Buddhaguhya which belongs to the Caryā-Tantra class. A commentary on the Ārya-Vajrapāṇyābhiṣeka?mahātantra had also been translated.

Though there appeared to exist formerly a continuity in the preaching and study (bshad pa and nyan pa) of these texts, since the Period of the Later Spread of the Doctrine, the continuity of preaching does not appear to have been great. During the Period of the Later Spread of the Doctrine there has been a great increase in the preaching of both the "Outer" Yoga-Tantra and "Inner" Yoga-Tantra. Namely, the puruṣottarna (skyes bu'i mchog) the great Translator known as rin chen bzang po [see image above], who had, in general, mastered and expounded all the basic texts of the Prajn͂͂āpāramitā and Tantra classes, has {R 352} especially expounded the Yoga-Tantras.

He (rin then bzan po) performed these (Tantric) rites and maintained (the Doctrine), and had many disciples from mnga' ris, dbus and gtsang. Among them the Junior Translator (lo chung) legs pa'i shes rab, gur shing brtson 'grus rgyal mtshan of mang nang, gzhon nu shes rab of gra and skyi ?nor Jn͂͂āna - these four were known as his "Four Spiritual Sons" (thugs sras).

Further, an ston grags rin of spu hrangs, rgya ye tshul, gung pa ye shes and dkon mchog brtsegs of mar yul, these four have been the disciples of both the Great Translator (lo chen, i.e. rin chen bzang po) and the Junior Translator (lo chus, i.e. legs pa'i shes rab).
Moreover, rkyang pa chos blo of rgyan ro spe'u dmar in Upper myang attended on the Great Translator. Soon after the arrival of the {R 353} Great Translator from Kāśmīra, he heard (from him) the rite of initiation into the rdo rje 'byung ba, according to the Śraddha Lineage and the ko sa la'i rgyan. He also listened in company with zab rtse rgya gar to the exposition of the Śrī-Paramādya?-nāma-mahāyānakalparāja, accompanied by an incomplete commentary and the initiation rite. He also listened attentively (to the exposition) of the Guhyasamāja according to the system of Jn͂͂ānapāda (the ācārya sangs rgyud ye shes, ye shes zhabs). He studied the ceremonies (lag len) under dol po sgom chen.

The exposition of the text he chiefly obtained from the Junior Translator (lo chung, i.e. rngog legs pa'i shes rab). After rin chen bzang po's return from his second journey to Kāśmīra, kyang pa chos blo obtained the Śrī-Paramādya-nāma-mahāyanakalpa-?rāja from him after the whole text had been translated, as well as all that had remained unfinished from his previous studies.

After that sum ston ye 'bar attended on the Great Translator (rin chen bzang po) for seven years and received from him a commentary on the first half of the Tattvāloka, a commentary on the first half of the Śrī-Paramādya-Tantra, an incomplete text of the Śrī-Paramādya-Tantra itself, the rdo rje 'byung ba, the Initiation rite according to the method of the two commentaries and the Initiation rites of dpal mchog rdor sems and deal mchog rigs bsdus. From the Great Translator he recived initiations only, and conducted most of his studies under the junior Translator (rngog legs pa'i shes rab).
Then lce zhar of Upper myang became a disciple of the Great Translator, but mostly studied under the Junior Translator for seven years, and mastered the Yoga-Tantras in general, and in particular the Śrī?-Paramādya-Tantra (dpal mchog).

After the death of the Great Translator, pho brang zhi ba ?od who was learned in the work of a translator, made numerous translations, and having invited many translators and paṇḍitas, he filled in the incomplete portions of the Śrī-Paramādya-Tantra (dpal rnchog).

zangs dkar ?phags pa shes rab did not find the Great Translator alive, and instead studied under the Junior Translator and the latter's assistant preacher an ston grags rin, as well as attended classes on the Initiation rite and exposition of the Tattva-saṃgraha, the Śrī Paramādya-Tantra (dpal mchog) and the Larger and Lesser recensions of the sbyong rgyud.

After that, the lo tsa ba and his disciple proceeded to mnga? ris, from where the lo tsa ba journeyed to Kāśmīra. gnyal preached on one occasion the Vajraśekhara-tantra. Later, when the Kashmirian Jn͂͂ānaśrī came to Tibet. He took up residence at chos 'khor ta bo (in Spiti). After a three years, stay, this paṇḍita learned to speak Tibetan, and gnyal studied undcr him for three years.

From mang nang pa he received (instruction) on the Tattva-saṃgraha accordmg to the method of Ānandagarbha (kun snying). From skyi nor Jn͂͂ana he received (the exposition) of the sbyong rgyud according to the method of the Master (Atīśa). Later zangs dkar (lo tsa ba) composed a commentary on the Vajraśekharatantra. The paṇḍita Mahākaruṇa (thugs rje chen po) and zangs dkar (lo tsa ba) also made a translation of three chapters of the second half of the Commentary at myang ro.

The son of snur ye shes rgyal mtshan chos rgyal {R 356} taught the system extensively to the All-knowing 'phags 'od. 'phags 'od taught it to bu rin po che (bu ston) and initiated him in the manner of pouring water from one vessel into another. bu rin ?po che composed (several) abridgements on the Yoga Tantra, an extensive exposition of the 'byung ba (rdo rje 'byung ba) and manuals on the different maṇḍala rites. He used to say that "his former karmic inclinations (vāsanā) towards the Yoga Tantra had awakened in him."

The Chapter on the History of the Yoga (Tantra)