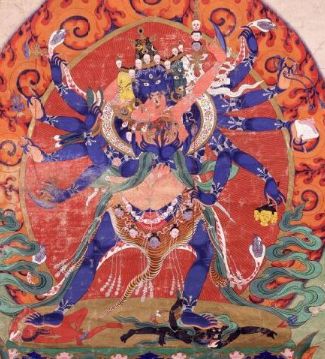 The widely propagated teaching and manuals of meditation (sgrub yig) according to the initiation and Tantra of Śrī?Saṃvara, originated first in the Spiritual Lineage of the disciples of the Great- Translator (rin chen bzang po). In later times mar pa do pa, spu hrangs lo chung, mal gyo and others taught extensively this Tantra.

The Lineage is as follows: Vajradhara, Vajrapāṇi, Saraha, sha ba ra dbang phyug and his disciple lu yi pa whom some call lu i pa and some lu hi pa. My teacher the great paṇḍita used to say: "There exists a book on the Sampannakrama degree composed by him, and in the Sanskrit text of the eighteenth śloka, (his name) is written as lu yi, so this (form) must be correct." lu yi pa taught the Tantra to king da ri ka pa and his minister ḍanṅgi pa. The latter taught it to rdo rje dril bu pa; the latter to ru sbal zhabs can; the latter to Jayandhara; the latter to Kṛṣṇācārya (nag po spyod pa ba); the latter to Vijayapāda (rnam rgyal zhabs); the latter to Tilli pa and he in turn taught it to na ro pa. The biographies of teachers who preceded the last named are numerous, and since it is easy to consult them, I did not write them down.

Na ro pa: he was the guardian of the northern gate of Vikramaśīla. The ācārya Śānti pa and the Venerable Maitrī pa heard the Tantra from him. The Venerable Master (Atīśa) heard it from Śānti pa. Atīśa in his turn taught it in mnga' ris to the Great Translator (rin ?chen bzang po) and his disciples. He also taught it to 'gar dge ba of gtsang rong. It is said that he expounded the text with the help of the commentary of Devarakṣita.

Further, the Master taught the precepts (of this Tantra) in dbus to nag tsho lo tsa ba and to an aged khams? pa. Further, a Nepālese known as pham mthing pa or a nges pa chen po had four brothers: the elder Dharmamati, and two {R 381}younger ones dus 'khor pa and thang churng pa. Dharmamati spent 12 years with na ro pa. pham mthing pa went to invite him. The elder said: "You, yourself stay here! Having received a prophecy from (my) teacher, I shall proceed to wu t'ai shan". He went away without anyone knowing where he was going.

Pham mthing pa attended on na ro pa for nine years and heard from him (the exposition) of many doctrines, including that of Saṃvara and the Hevajra. He obtained the lower and intermediate siddhis with the help of the Cycle of Saṃvara. His younger brother dus 'khor ba attended on na ro pa for five years, and also heard many doctrines, such as the Saṃvara Cycle and others. The youngest thang khun pa came to invite dus 'khor ba, and also obtained initiation and some instructions in the Tantra from na ro pa. The elder brother said to thang ?chun pa: ''You should meditate on Vāgiśvara". He follow?ed the advice and meditated. He threw a flower into a stream (in order to test his attainments) and three times the flower floated up-stream. The first two times they did not notice it, but on the last occasion when the flower floated up?stream, he picked it up, and thus he did not obtain the higher and middle powers of Vāgiśvara, but he obtained the lesser powers by which he was able to compose ślokas and learn texts by heart.

When the flower was carried down?stream, a servant named Bhadanta drank of this water and obtained very great wisdom. pham mthing pa then said to thang chung pa: "You go to Tibet and look for gold, here (meaning the residence of na ro pa) you should keep the {R 382} eternal lamp (burning)". thang chung pa then took with him Bhadanta as servant and proceeded as far as gnyal. The servant Bhadanta while looking after horses at ngur smrig, learnt Tibetan. From brang ti he heard (the exposition) of the Abhidharmasamuccaya and mastered it. When he discussed it with the ācārya, he won the debate. Bhadanta then said to brang ti: "When I shall come again here as paṇḍita, you, Teacher, should receive me!" They, the master and servant, collected 500 golden srangs, and eternal lamps and gaṇacakras were kept up without interruption (at Pulahari in the vicinity of Nālandā).

The lo tsa ba klog? skya shes rab rtsegs heard the Tantras of the Saṃvara Cycle from pham mthing pa. When the latter came to Tibet, the mal gyo lo tsa ba blo gros grags obtained the Saṃvara initiation and method of concentration from him. Later mal gyo himself went to Nepāl and thoroughly heard the Cycle of Saṃvara from pham mthing pa and (his) brother Bodhibhadra (byang chub bzang po), a disciple of na ro pa, and the Nepālese Mahākaruṇa, a disciple of the Nepālese Kanakaśrī. The bla ma sa chen (kun dga' snying po) heard it from him. When the latter was expounding the Tantra, sun lung pa bsod nams rdo rje wrote down notes, which became known as the "Commentary composed by sa chen". sa chen taught it to his own son rtse mo (rje ?btsun bsod nams rtse mo) and brother. This Venerable One taught it to Śa skya pang chen. dmar chos kyi rgyal po heard the Saṃvara Tantra from the Venerable One (bsod nams rtse mo). The pang chen taught him the three Tantras together with precepts.

This dmar chos kyi rgyal po belongs to the line of the nephew of dmar chos kyi rgyal mtshan, a disciple of spu hrangs lo chen. He had three nephews: dmarshes rab rdo rje, thub pa shes rab and brtson 'grus rdo rje. He studied under his own uncle brtson 'grus rdo rje the Saṃvara-Tantra, according to the teaching of the Lineage of his own teacher, the Yoga {R 383} Tantra, the "Six Doctrines" of lo tsa (lo tsa chos drug i.e. rin chen bzang po'i chos drug) and other texts. There must have existed many lineages of disciples, holders of the doctrine of Saṃvara, originated from sa skya pa, father and sons, but I did not hear of anyone else, except dmar chos rgyal, and therefore I am unable to write about it.

Mar pa do pa was born in the family of yar 'brog bla do, in which many kalyāṇa-mitras had been born. His father was named kalyāṇa-mitra chos rgyal. His own name was chos kyi dbang phyug. At first he studied Sanskrit with a paṇḍita and met rong zom chos kyi bzang po. Later he studied also with go rub lo tsa ba tshul khrims rgyal ba. Then he proceeded to Nepāl and it is said that he met there mar pa lho brag pa who was returning from India.

According to this (story) and the account of his meeting with cog ro chos rgyal, this lo tsa ba seems to have been born, when the Venerable mar pa was about 31. He lived to the age of 95. He presented to mar pa lho brag pa one golden zho when he met mar pa. mar pa said to him: "You may be in need of even one golden se be. You take it yourself. I am going to Tibet to sweep gold. na ro pa is not there, as he has gone for Secret (Tantric) practice. You should listen to the Doctrine from the four disciples of na ro pa." Then when mar ?pa do pa arrived in ti ra hu ti, a large crowd had gathered, and he inquired: "What was there?" They said to him: "We are looking at the coming of na ro pa." He mingled with the crowd, and having approached na ro ?pa, offered him one golden zho. na ro pa after holding it in his hand, threw it on the ground and gazed at him with wide-open eyes. Though he did not say anything, mar pa do pa understood that he had been blessed (by na ro pa). After that (mar pa do pa) proceeded to Magadha.

Following the advice received from mar pa lho brag pa, he obtained the initiation into the Cycle of Saṃvara, the Tantra and its precepts according to the system of na ro pa, from na ro pa's {R 384} disciples Manakaśrī, Prajn͂͂ārakṣita, kha che byan?g chub bzang po and Pramudavajra. He also heard many instructions from many paṇḍitas.

After returning again to Nepāl, he heard the exposition of the na ro pa's system from pham mthing pa, from the latter's younger brother Vāgiśvara (ngag gi dbang ?phyug) and the Nepālese Kanakaśrī. He also received many instructions from the siddha phyag na, a direct disciple of Maitrī pa, who was residing in Nepāl. He also studied under the brāhmaṇa Kṛṣṇapāda, a disciple of the Nepālese dza hūṃ. He translated many texts belonging to the Cycle of Saṃvara with the assistance of Sumatikīrti.

On reaching Tibet, this lo tsa ba (mar pa do pa) gathered numerous disciples who heard from him the Cycle of Saṃvara, and gtsang mi mkhas pa rgya nam, do'i gze ba blo ldan and cog ro chos rgyal of khams continued successfully his Spiritual Lineage. A disciple of the Lord sgam po pa, possessed of excellent knowledge, and known as la yag pa byang chub dngos grub, also obtained from gze ba the Cycle of Saṃvara, according to the system of mar pa do pa (mar do) at bla do. He composed an extensive commentary, basing himself on the instructions received by him from sgam po pa, on the (Saṃvara) mūla?-tantra and the kun spyod. He also composed a commentary on the commentary of the Pan͂͂cakrama by dril bu pa and an exposition of the Utpannakrama (bskyed rim). mar pa do pa himself composed an extensive commentary and a sum?mary on both the Mūlatantra and the Yoginī-san͂͂caryā.

When the son of mar do, named nam? mkha' 'od was born, he obtained the complete precepts of his father's teachings. He went to skyi sod (lha sa) and other places. He taught to others short precepts, and died at one and the same time with his father, so {R 385} that his Lineage did not continue. gze ba taught (the system) extensively to his own son bde mchog rdo rje. From the latter the lineage received a great spread. mkhyen? rab dbang phyug heard the exposition of the Cycle of Saṃvara from yan rtse ba rin chen seng ge. He also heard it from khang gsar pa bsod nams mgon, but he used to say that he had not found the preceding Lineage. It must have been the school of mar do (mar pa do pa).