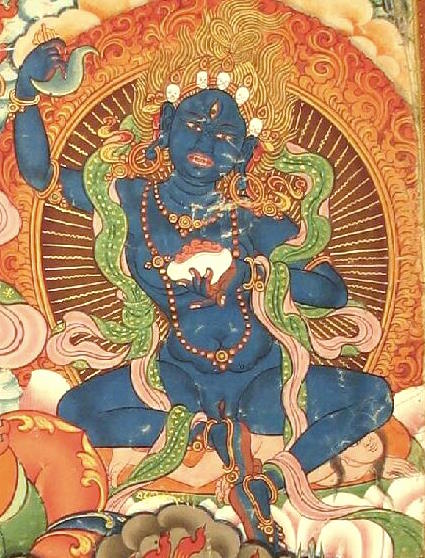 Further, the manner of the spread of the secret precepts of the doctrine of the "Path and Fruit" handed down by zha ma, brother and sister: In general (it is said that), ārya-Avalokiteśvara had incarnated himself into the Dharmarāja srong btsan sgam po, and established the people of Tibet on the path of observing the Ten Virtues. The Venerable 'jam pa'i dbyangs had incarnated himself in the person of [7a] Thon-mi Sambhoṭa (%). After studying with the Indian paṇḍita Devavitsiṃha (lha'i rig pa seng ge), he became learned in the Indian script. From the fifty letters of the Indian {R 219} alphabet, he fashioned the thirty letters of the Tibetan alphabet, and composed several works on grammar. He then first taught the (new) script to the king. After that he taught it to some of the (king's) subjects known for their intelligence, and the (script) spread over the greater part of Tibet, and all were fortunate to perceive the Teaching of the Blessed One. Bhagavatī ārya Tārā (incarnated) in the princess (kong jo) srul glen, daughter of T'ai tsung (%) of the T'ang dynasty, who had invited the sixteen sthaviras (to China), and the princess was called in Tibetan "Water-Lotus" (chu'i nang gi pad ma, W?n ch'?ng). She brought with herself the Lord (jo bo) of sphrul snang, and became the queen of srong btsan. She herself built the vihāra of ra mo che, and suggested herself the places where the sphrul snang vihāra and other vihāras were to be built. She established, well the custom of worshipping the Jewel (Ratna).