Rwa Lotsawa (b.1016) is one of the most controversial Buddhist teachers in Tibetan history. Was he a hero or a villain? His tradition boasts that he killed/murdered thirteen Lamas - many of them famous. Rwa Lotsawa is also responsible for popularizing many Vajrabhairava and Krishna Yamari traditions of practice.

Ra Lotsawa Dorje Drag, 1016-1198, (rwa lo tsA ba rdo rje grags) was born in 1016, in Nyenam, in a place called Nangyul (snye nam / gnya' nang snang yul), on one of the most important Nepali-Tibetan trade routes. His father was Raton Konchog Dorje (rwa ston dkon mchog rdo rje) and his mother was Dorje Paldzom (rdo rje dpal 'dzom). His father was a lineage holder of the Nyingma tradition Yangdag Heruka and Vajrakila, and he passed these on to his son. According to tradition, soon after birth the goddess Remati took him into her robe and traveled across Tibet for two months.

At the age of fourteen Ralo made his first trip to Kathmandu, arriving in Patan during a period of some political social instability, but great cultural fluorescence. Despite the considerable details of his sojourn there given in the (probably) thirteenth-century hagiography, recent scholarship has shown that little of the information given can be trusted, from the name of the monastery in which he resided to the circumstances of his ordination, where he was given the name Dorje Drag.

Ralo is said to have trained under a master named Bharo, a title given to newly
influential members of the merchant class. The Blue Annals gives the teachers
name as Bharo Chagdum (bha ro phyag rdum). Bharo was a specialist in the
Vajravarahi and Vajrabhairava ritual systems, the transmission of which Ralo
received during this first visit. According to the hagiography, during this
first trip he already displayed his penchant for magical combat, engaging with a
Shaivite teacher whose doctrine he insulted, driving the Shaivite to suicide. In
addition he trained with a Mahakaruna, a master in Naropa's lineage of
disciples. From him he received a number of tantric initiations, including the
Chakrasa?vara and the Namasamgiti.

Returning to Tibet, Ralo quickly became enmeshed in clan feuds over property and marriage arrangements, and he used his new magical abilities to do battle with his enemies. Many of his enemies were translators and lamas propagating in competing tantric systems, and Ralo infamously engaged them in combat. Khon Shakya Lodro ('khon shakya blo gros), a member of the Khon family that would later initiate the Sakya tradition and a holder of the same Yangdag Heruka and Vajrakila lineages, saw in Ralo a serious rival to his influence and survival as a sought-after teacher. He accused Ralo of propagating a non-Buddhist teaching, one that would lead all Tibetans to Hell. According to the hagiography Ralo slew Shakya Lodro with the killing rite of Vajrabhairava, and witnesses saw Vajrabharava in the sky carrying the 58-deity ma??ala of Yandag Heruka as a sign of the Vajrabhairava's superiority. Shakya Lodro's disciples and feudal subjects then became disciples of Ralo.

Later a similar contest arose between him and Langlap Jangchub Dorje (lang lab
byang chub rdo rje), another important Vajrakila master. Ralo had gone to pay
his respects to the venerable teacher, but Langlap, like Shakya Lodro, dismissed
Ralo as a purveyor of non-Buddhist magic. In the ensuing contest, however, Ralo
was defeated, his disciples slain by Langlap's superior magic. According to the
hagiography Ralo then experienced a vision of Tara, who sent him to Nepal for further instructions from Bharo and other Nepali masters. Upon his return to
Tibet he once again engaged Langlap, this time emerging victorious and slaying
the Nyingma lama.

It was during the second trip south than Ralo is said to have gone to India and
ordained at Nalanda.

In addition to challenging rivals to competing tantric systems, Ralo spent his wealth renovating temples in southern Tsang and Lhato, including Samye, Tibet's first monastery, which had been damaged by fire in 986. He also sponsored translations, the copying and recitations of scripture, and the installation of statues.

Ralo is known to have attended the famous religious council of 1076, convened by the Purang King Tsede (rtse lde), for translators working on new texts and new versions of scripture from India. There Ralo met Nyen Lotsawa Darma Drag (gnyan lo tsA ba dar ma grags), who accompanied Ralo to India. The two later fell out, and slayed each other in magical combat.

[Extracted from the Treasury of Lives, Tibetan lineages website. Edited and formatted for inclusion on the Himalayan Art Resources website. February 2012. 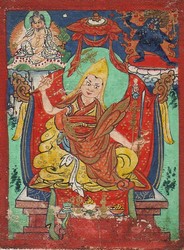 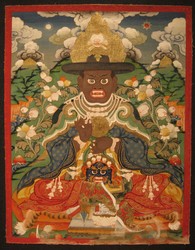 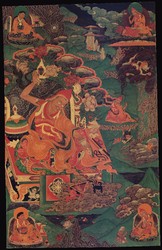 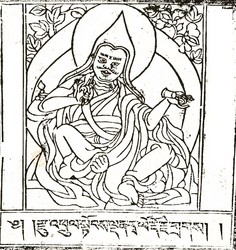 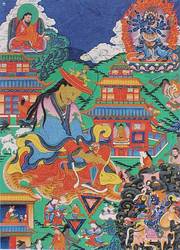