The protector deity Begtse Chen, (English: the Great Coat of Mail. Sanskrit name: Prana Atma), was popularized within the Sarma (new) Schools of Tibetan Buddhism by Marpa Lotsawa (1012-1096) and Sachen Kunga Nyingpo (1092-1158), the respective founders of the Marpa Kagyu and Sakya Traditions of Tibetan Buddhism. The protector was later adopted and incorporated into the Gelug School of Tsongkapa and subsequently became popular in Mongolia - predominantly following the Gelug tradition since the 17th century.

Begtse Chen is the main protector associated with the Hayagriva cycle of Tantric Deity meditation practice. For over one hundred years Western scholars have published the history of Begtse erroneously as beginning with the 3rd Dalai Lama and the subjugation of a Mongolian war god - referring to the protector deity Begtse. A common source given for the Western source of the story, based on Mongolian oral history, is Albert Grunwedel (1856-1935). In Tibetan Buddhism Begtse is believed to have originated in India. The practice entered Tibet with Nyen Lotsawa in the 11th century.

It is commonly said by some sources in Mongolia that there were three Begtse Chen coral masks made at approximately the turn of the century a little over a hundred years ago. Currently there are at least three masks in museums in Mongolia, another mask is in the collection of the Rubin Museum of Art in New York City. Aside from these there are numerous masks available on the Asian art market either real or copies. It is not easy to distinguish between the original Mongolian masks and the modern copies. 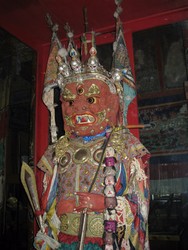 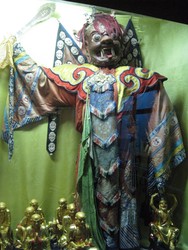 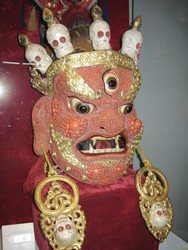 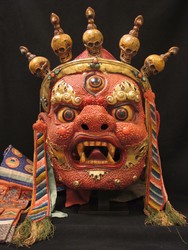