Video: A Question About Eyes

The Eye Clearing Avalokiteshvara (mig 'byed) originates with the Revealed Treasure of the Nyingma Tradition and the teacher Nyangral Nyima Ozer in the 12th century. Since the original text of Nyangral many authors from numerous traditions such as Kagyu, Sakya and Gelug have written follow up ritual and meditation texts, including figures such as Karma Chagme and Dagchen Kunga Lodro.

Although originally a Nyingma practice found in Southern Tibet, the Eye Clearing Avalokiteshvara has grown immensely in popularity in Mongolia. One of the largest images in the Ganden Monastery, Ulan Bator, is this Eye Clearing form of the deity. It is possible that the 8th Jetsun Dampa is principally responsible for the 20th century popularity.

Three of the images below are of full size paintings. Five of the images are Mongolian miniature paintings. There are two images of sculpture. The first is a very large metal repousse piece constructed at Ganden Monastery. The second sculpture is made of wood and belongs to the Chojin Lama Temple.

The focus of the special activity of the deity is to remove the ignorance of all beings and on the most mundane of levels to help relieve eye ailments.

Description: Lokeshvara is peaceful in appearance, white in colour, with one face and four hands. The main pair of hands perform the eye clearing gesture at the heart. The second pair of hands holds in the right a nectar filled vase and in the left a mirror. He is adorned with celestial garments and jewels: in a standing posture with the legs together.

"To the Lord unstained by faults, white in colour, the head adorned with the perfect buddha, gazing on beings with eyes of compassion; to Avalokiteshvara I bow." (The verse s attributed to the Tibetan King Songtsen Gampo, 557-649). 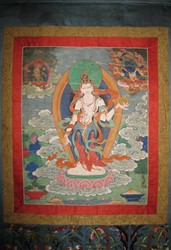 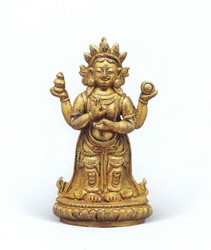 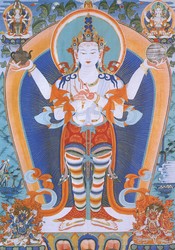 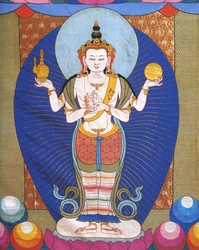 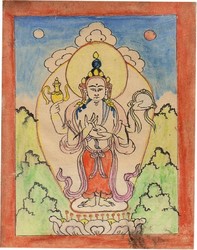 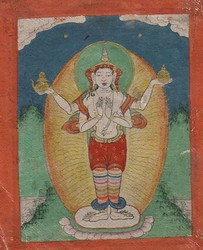 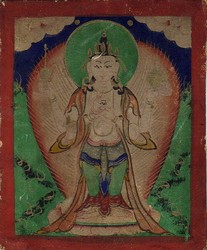 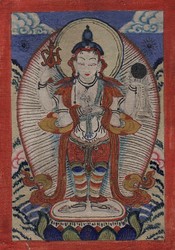