An Introduction to Visual Mandalas: Painting & Sculpture
(based on the exhibition 'Mandala: The Perfect Circle' at the Rubin Museum of Art)
Exhibition Details

Physical representations of Deity Mandalas are created for many different reasons and probably least of all as 'an artistic aid for meditation' as is commonly believed by many Western scholars. The primary reason for the physical creation of a mandala is to have a visual presence when preparing and conducting a ritual initiation for Tantric Buddhist devotees into a deity yoga meditation practice. Initiations, sometimes called ceremonies or empowerments, require a physical depiction, as stipulated in the Tantric texts, either two dimensional or three dimensional in form, of the deity, the celestial palace and the surrounding lotus petals, vajras and five coloured flames. Sand mandalas and painted wooden mandala plates are good examples of objects used for this ritual function.

See objects in the exhibition that were created to be used in an initiation ritual.


In Tantric Buddhism, after receiving an initiation, and maintaining a serious and responsible attitude, it is often a requirement, especially in the Anuttarayoga classification of Tantra, that the initiated devotee own and have in their possession an image of the central deity, or of the deity, entourage and surrounding mandala. The painting typically remains in the home or lodging of the practitioner, but must travel with that individual when they are away from home for more than a few days (as stipulated in the specific Tantra). These paintings are generally of a smaller size and spend most of their life rolled up and hidden from the eyes of others. This is also a significant reason why there is so much Tantric Buddhist art in the world.

See paintings in the exhibition likely to be created as a required article of faith.


Painted mandala sets, either as scrolls or murals, can also be created for the purpose of sanctification, blessing and making spiritually secure a new temple or monastery. Also, when an individual requesting and acting as the donor for the bestowing of a large cycle of initiations - requiring mandalas - it is considered auspicious at the least and sometimes mandatory to commission a set of either the full mandalas or the central deity figure for each of the initiations. These newly created paintings would hang in the temple hall for the duration of the time while the master bestows the cycle of initiations to the students and the donor.

It is also common to create a mandala or deity painting in memory of an important teacher after their passing. One of the highlights of the exhibition are the three paintings commissioned by Lhachog Sengge, a famous abbot of Ngor Monastery in the 16th century, and dedicated to the memory of three important religious instructors: the paintings of Samvarodaya Chakrasamvara, Vajrabhairava, and Samvara Kalachakra.

See paintings in the exhibition that are dedicated by Lhachog Sengge.

The two most important sets of paintings represented in the exhibition are the 'Lama Dampa' Vajravali mandala paintings and the 'Ngorchen' Vajravali mandala paintings (see Vajravali Outline). The Vajravali is a Sanskrit text written in the 11th century by an Indian scholar named Abhayakaragupta. It is a compendium of deity mandalas and meditation practices. In the text he describes twenty-six or forty-two principal Tantric deities along with their mandalas. The difference in the calculation of the deities depends on how the different forms of the same deity are numbered or not numbered in the list. In Tibet in the 13th century the Vajravali became a popular system for bestowing initiations.

See paintings in the exhibition that are specifically Vajravali.

The first and oldest of the two sets, in a set of forty-two paintings, known as the Lama Dampa Vajravali Set was created and dedicated to the memory of Lama Dampa Sonam Gyaltsen (1312-1375) by a devoted and obviously wealthy devotee. The second important set, the Ngorchen Vajravali Set in fourteen paintings, was commissioned by Ngorchen Kunga Zangpo in memory of one of his spiritual teachers, Sazang Pagpa Shonnu Lodro (1358-1412/1424).

See other paintings in the exhibition created as a dedication in memoriam.


A topic of some confusion are the Eight Great Cemeteries, or Charnel Grounds, surrounding the celestial palace of a wrathful deity. Charnel grounds are ONLY associated with wrathful or semi-wrathful deities, but NOT ALL wrathful deities are surrounded by charnel grounds. Typically mandalas of the two wrathful deities Rakta and Krishna Yamari are not depicted with a circle of eight charnel grounds. (Peaceful deities are surrounded by beautiful gardens). For a wrathful deity mandala the charnel grounds can be depicted either inside the nested ring of concentric circles or on the outside of the nested circles. Both methods for presenting the charnel grounds are stipulated in the original Sanskrit literature of India. In the current exhibition the best example of a painting with an outer set of charnel grounds is the Avalokita Samvara mandala (see a full description). Contrary to the standard system, the Kalachakra Tantra is unique in presenting an alternate system of sixteen charnel grounds, not eight, however only the less common form of the mandala with a slightly more wrathful central figure, the Samvara Kalachakra, depicts the system of the sixteen cemeteries. As a general rule, the eight cemeteries only occur with deities (wrathful or semi) belonging to the highest classification of the four classes of Buddhist Tantra - Anuttarayoga.

See other examples of mandalas where the Charnel Grounds are on the outside.

A persistent myth concerning mandalas is that there is a group of Eight Siddhas that are universally known and named that occupy the eight charnel grounds as depicted in art. Each siddha is said to abide in one of the cemeteries and associated with one of the eight directions. This idea just simply isn't accurate. In Tibetan style art the placing of identifiable siddhas in mandala cemeteries is neither textual, Sanskrit or Tibetan, nor is it orthodox. The idea and discussion of eight iconographically identifiable siddhas inhabiting the charnel grounds is entirely a Kagyu and Sakya Tradition phenomena.

See a longer explanation about the Eight Siddhas in mandala art.

There are a number of objects in the exhibition that are not mandalas, but look similar to mandalas, and a number of objects that are called mandalas because they are mandala-like. The first are yantras. Yantras are drawings, diagrams, sometimes wood block prints, often geometric and circular, and intended to be two-dimensional. They do not represent a three-dimensional architectural structure with a deity and palace at the center. Also, a Buddhist practitioner does not meditate or visualize a yantra. They are intended as talismans and charms to ward off obstacles, demons, and to bring good fortune, power and a rich harvest and abundance of wealth and happiness, etc. They can also be used to curse and send obstacles to enemies and opponents. Yantras are commonly reproduced from wood cut blocks or simply drawn onto paper or cloth. They are then blessed by the Buddhist clergy or sanctified in a ritual specifically designed around the purpose the yantra was created for; wealth, power, cursing, etc. After that the yantra is folded, sewn into a piece of cloth and worn on the body. Other types of yantras, also created out of paper or cloth, used in malicious rituals would generally be destroyed after the completion of the ritual. They would typically be burnt, or buried, or shredded, depending on the instructions in the ritual text.

See objects in the exhibition that are Yantras.

Lotus Mandalas are referred to on the HAR website as mandalas but more properly should be referred to as mandala-like. The objects are a three dimensional metal sculpture of a deity and retinue figures inside a lotus blossom, above a stem which is the stand for the object. Hinged petals can appear closed or open revealing the central figure and deities. The lotus mandala does not depict the palace, outer gardens and cemeteries, double vajra, giant lotus, sphere of vajras and flames of five colours. A lotus mandala cannot serve as an architectural blueprint for a deity, retinue, and surroundings, nor can it be understood as a complete mnemonic device for the source Tantric text and meditational system that the deities and full mandala represent.

See objects in the exhibition that are not mandalas. 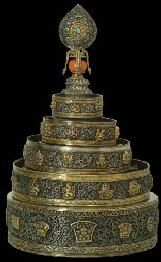 There are two other subjects where the term mandala has come to be applied. The first is the four elements as conceived in Tantric thought: air, earth, water and fire. Each of these is represented by a specific shape and colour and called an element mandala. The second subject is concerned with a special type of offering amongst all of the different types of offerings that exist in Tantric practice. It is an Offering Mandala, a symbolic model of the Buddhist world presented by Buddhist practitioners to the religious teachers, Buddhas and deities. It can be done simply as a prayer with thoughtful intentions or as a formal ritual practice requiring objects and sequence. An object called a mandala plate, circular in shape, is used for this ritual although anything flat and clean is acceptable. The mandala plate is filled with a heap of rice and then metal, or cloth covered wooden rings, generally three or four, are placed above each pile of rice creating a circular tiered structure. The offering is sometimes topped with a small replica of a heavenly palace or a Dharma wheel. This ritual, imagining the world represented by the circular plate and tiered rice, is called a mandala offering.

In the current exhibition there is a very beautiful metal mandala plate arranged with permanent miniature buildings, figures and object symbols surrounding a central mountain topped with palaces and a stupa. These types of ritual and decorative religious objects where commonly created in large quantities by the emperors of China to commemorate special events and dates in the calendar. The objects would be given away to the most important monasteries and temples in the land usually accompanied by a request for prayers and good wishes.

See another mandala plate almost identical to the one in the exhibition.


There are standard prayers and specific mandala offering prayers recited in the various Buddhist traditions when conducting the ritual. The longest prayer was composed by Chogyal Pagpa in the 13th century and is used universally throughout the Himalayas, Tibet and Mongolia. The prayer describes in detail, based on the Abhidharmakosha literature of the 4th-5th century, the physical appearance of the ancient Buddhist world.