A persistent myth concerning mandalas is that there is a group of Eight Siddhas that are universally known and named that occupy the eight charnel grounds as depicted in art. Each siddha is said to abide in one of the cemeteries and associated with one of the eight directions. This idea just simply isn't accurate. In Tibetan style art the placing of identifiable siddhas in mandala cemeteries is neither textual, Sanskrit or Tibetan, nor is it orthodox. The idea and discussion of eight iconographically identifiable siddhas inhabiting the charnel grounds is entirely a Kagyu and Sakya Tradition phenomena.

It is extremely rare to find any identifiable siddhas in any mandalas produced by the Nyingma or Gelug Traditions. For the Nyingma Tradition the reason is because the various names of siddhas making up the different groups are primarily associated with the later Tantric traditions of India, concerning mainly the Hevajra and Chakrasamvara Tantras that entered Tibet in the 11th and 12th centuries. These Tantras and associated siddhas in the early lineages are all much later than the early formation of the Nyingma Tradition in the 8th century. For the Gelugpa, based on a visual analysis of their mandalas, they depict generic appearing siddhas, and often depicting two siddhas per cemetery. It is possible that they avoid iconographically identifiable siddhas because of the lack of textual orthodoxy. (This is not to say that there won't be some exceptions found in Gelug and Nyingma mandalas as studies develop).

As for the Sakya and Kagyu Traditions, and the artistic practice of placing identifiable mahasiddhas in the cemeteries, then it is important to look at early Indian Lotus Mandalas where the practice may have originally started. However, the siddhas depicted on the outside of Lotus mandalas are not a standardized list or group and rarely definitively identifiable.

It is true that a number of the individual eight siddhas among the different systems are repeated in the different groupings, however no where are any of these groups of eight associated explicitly with the eight charnel grounds.

To a greater or lesser degree the Sakya Tradition adopted an almost identical system to the Kagyu list of eight siddhas but chose to insert Virupa in place of Padmavajra (Sakya system). In the Sakya Tradition these eight siddhas are only found as a group for the purpose of adorning the eight cemeteries in art. They do not hold any place in the religious history of Sakya or as a model for understanding lineages as they very much do in the Kagyu Tradition. The Sakyapas appear to have merely borrowed this system for reasons of art and iconography.

For many Sakya mandala paintings Virupa is placed at the top cemetery and the others move clockwise to the right.
1. Virupa
2. Luipa
3. Kukkuripa
4. Saraha
5. Indrabhuti
6. Dombi Heruka
7. Nagarjuna
8. Ghantapa

In the exhibition Mandala: The Perfect Circle there are seventeen mandalas that depict the eight cemeteries. If these are taken as a good representation, a cross sampling, of all wrathful and semi-wrathful deity mandalas with cemeteries and siddhas then the breakdown is as follows:

*Generic siddhas refers here to the siddhas that do not have identifiable iconographic features. Generally these figures are a repeated form with the hands and legs in the same appearance one to the other. They do not have the iconographic detail or complexity of the known Mahasiddhas that are sometimes found in the cemeteries.

What do we know?
1. In Tibetan Buddhism and Himalayan Art there is no universal system of eight siddhas.
2. The Nyingma and Gelug Traditions typically depict generic siddhas in the eight cemeteries.
3. The Kagyu and Sakya traditions both have systems of eight siddhas which they occasionally depict in mandala art, but not consistently.
4. For Sakya mandalas, if the siddha Virupa is present, then he is always in the western cemetery.
5. In the Sakya and Kagyu systems identifiable siddhas are not always depicted in the same cemetery or direction.
6. In some mandala paintings two siddhas are depicted in each of the eight cemeteries, both generic and identifiable. 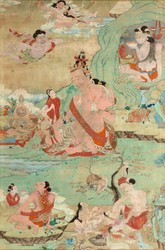 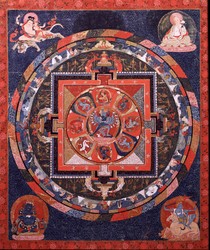 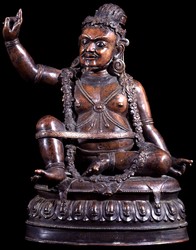