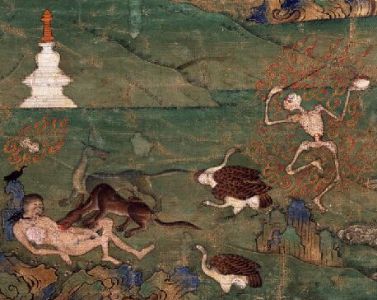 Sixteen Charnel Grounds: In the Kalachakra Tantra system sixteen charnel grounds are described. The 634 Deity Kalachakra Mandala, being only slightly wrathful, generally does not appear with any surrounding charnel grounds. However, the Mahasamvara Kalachakra always appears in paintings surrounded by the sixteen charnel grounds. These eight or sixteen can appear either immediately surrounding the Celestial Palace of the deity and retinue or they can appear as the outer ring of the mandala. The root Tantras are vague on this subject of charnel grounds and it is the Indian Sanskrit commentaries that explain the different ways that the cemeteries can be imagined and subsequently depicted in visual representations.

In the Tantric Buddhist classification of Anuttarayoga, according to one system, the Eight Direction Gods of the Cemeteries are:
1. Shakra on an elephant, east,
2. Yama on a buffalo, south,
3. Varuna on a makara, west,
4. Yaksha on a horse, north,
5. Ishana on a bull, north-east,
6. Agni on a goat, south-east,
7. Rakshasa on a zombie, south-west,
8. Vayu on a deer, north-west.
The eight cemetery guardians/gods are the same as the - Ten Gods, Guardians of the Ten Directions with two of the gods, Brahma and Bhudevi, omitted.

Toh 402. The Tantra of the Ornament of the Charnel Ground. དུར་ཁྲོད་རྒྱན་གྱི་རྒྱུད། · dur khrod rgyan gyi rgyud. śmaśānālaṃkāratantra.
The Glorious King of Tantras That Resolves All Secrets (Toh 384)

1.15. Symbolizing the absence of conceptuality about an ordinary universe and inhabitants,
The eight charnel grounds
Should be arranged to left and right in order.

1.­16. The concepts related to each feature, moreover,
Should be learned from a master’s oral instructions.

1.­17. Symbolizing the power of the antidote fully developed,
Trees are continuously arranged in sequence.
The directional protectors are arranged as symbols
For the overcoming of concepts oriented toward the ten non-virtues.

1.­18. The eight nāgas are stationed
To destroy the wicked ones
Of attachment, hatred and ignorance.

1.­19. Rain clouds are arrayed
So that body and speech may act for the welfare of beings,
With divine pride in the two form buddha bodies
Endowed with great compassion.

1.­20. Inner and secret are the same.
Likewise, as for the ultimate, the fourth,
One should learn the oral tradition. 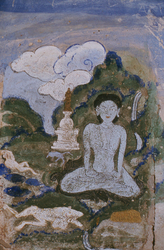 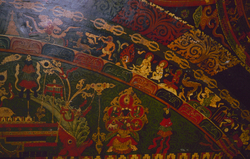 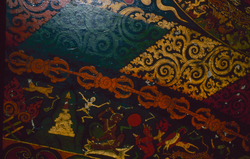 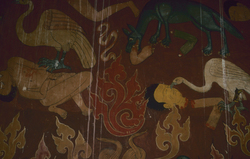 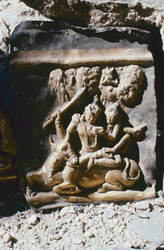 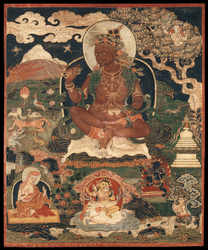 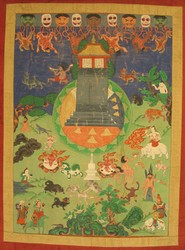 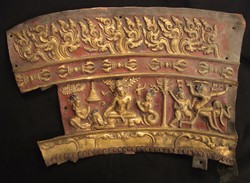