Again, Mitra bestowed the precepts of the Six Doctrines (chos drug) on the pannddita' Saripu?a. The latter imparted them to mi nyag grags pa rin chen. His Lineage continues to exist to the present day, and its (teachings) are followed at smyug tshal of lho brag, There appear also to exist preachers (of this doctrine).

The Lineage of the Initiations known as Mitra brgyartsa: rdo rje chang (Vajradhara), Avalokitesvara (spyan ras gzigs), the siddha Mitrayogin. The latter imparted it to the pannddita Amoghavajra (Don yod rdo rje). He came to bestow the initiation and its exposition on gchan 'd srungs mgon po of gsar mda' khra lung. At the time of his going to Lower khams (mdo khams) he appears to have bestowed once more all the initiations at ge kha brag. But in later times when the Lineage of Initiations appeared to have come to an end, several kalyannamitras from Lower khams (mdo khams) passed through sgyi smad khra lung in search of the Lineage. People said: The lay brother (upasaka) named mgo khom jo sras, a disciple of gchan 'od srungs mgon po who lives at 'phan yul rgyal, perhaps possesses the Lineage. The kalyannamitras proceeded to 'phan yul in {R1043} search of him.

Byams pa seng ge, a kalyanna mitra of rgyal, came to gsang phu to hear the Doctrine of Maitreya (byams chos). They met him and inquired about mgo khom 10 srangs. Byams pa senge replied: He was my countryman! But I doubt that he possesses the Hundred Initiations. He used to be an old Tantric, good natured and pious. With you, I shall also ask for them. Then it is said that he obtained them.

Those who did not believe the statement of byams pa senge (about his obtaining precepts), instead met mgo khom jo sras himself and obtained the initiations from him.

byams pa seng ge and ba lam pa rin she exchanged the Initiation and the Vajramala (rdo rje phreng ba) of Abhaya. .gyun ston rdorje dpal obtained it from ba lam pa ring she at mtshur phu. rdo rje dpal bestowed it on pag ston gzhon tshul. The latter imparted it to the bla ma tshul rgyal of snar thang.The latter bestowed it on the bla ma mgon po drug. The latter on the pan chen 'jamd byaps ral gri. The latter on kun mkhyen 'dzam gling nyi shar. The latter on the Dharmasvamin stan gcig pa shes rab bzang po. I gave here an account of only one Lineage, but (the teaching) was handed down through many other Lineages also.

The Chapter on the system, which originated from the Mahasiddha Mitra. 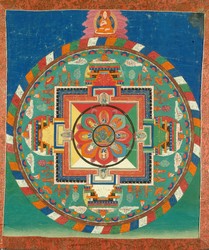 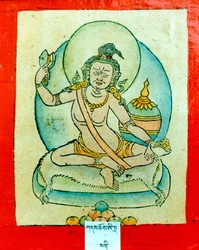