Milarepa: Poet and Yogi of Tibet

Milarepa (1040-1123) is one of the most famous and well known of all the Tibetan culture heroes. Although his exact dates are disputed it can be accepted that he lived during the 11th century and into the beginning of the 12th century. His fame comes from the many songs that he composed and sung on the subjects of ordinary life experience and Buddhist religious teaching. Milarepa's teacher, Marpa Chokyi Lodro, was the progenitor of all of the many different Kagyu traditions in Tibet (except for the Shangpa Kagyu which originated with Khedrub Khyungpo Naljor).

The form and iconographic appearance of Milarepa are very easy to recognize. Typically he is shown in a seated posture with the legs in a relaxed pose, or alternately one knee raised and the sole of the foot placed flat on the ground. As an iconographic characteristic he typically holds the right hand raised to the ear and slightly cupped, facing outward, in a singer's gesture. The left hand placed in the lap commonly holds a white skull cup, or alternately placed slightly behind the back supporting the body, evidenced by a slight twist in the torso. His most iconic and trademark of characteristics is a single white cotton robe wrapped about the body, sometimes leaving the right shoulder bare, or both shoulders as commonly seen in narrative paintings.

Milarepa is regarded as the greatest yogi in Tibetan history. A yogi is a practitioner of yoga, here meaning Buddhist Tantric yoga. From the time of Milarepa in the 12th century, it became the custom of all yogis in the Kagyu tradition to also wear a single white cotton robe just like Milarepa. It is very rare in the 20th or 21st century to see any practitioners of the Kagyu Tradition wearing the traditional white robe of Milarepa.

Along with the robe, earrings fashioned from white conch shell were a tradition inherited from India. Milarepa can often be seen depicted in paintings with round white earrings along with a bright red meditation belt, extending from the right shoulder to the waist on the left side, used to hold the body in particular and sometimes difficult to perfect yoga postures. He is always portrayed barefooted, a rare thing in such a harsh climate as Tibet and the Himalayan Mountains.

Milarepa as a Tibetan religious icon and a folk hero is well represented in art, both in painting and sculpture. A very common example are the many life story paintings depicting his early childhood right up to his passing and cremation. Some compositions depict the entire life story in a single painting. Other compositions are created as large sets of paintings having as many as nineteen compositions detailing every aspect and story, large and small, of his life and deeds.

Life story paintings in the Tibetan artistic tradition, with Buddhist influence, generally have an uneven number of compositions. The reason for this is a matter of aesthetic appearance. Sets of paintings such as this were hung together in either a temple space, or a large family chapel. The first painting of the set would be placed at the center. The remaining paintings would then hang, alternating, to the right and left of the central painting with an equal number of paintings, in a pleasing manner, hanging symmetrically to both sides of the centerpiece.

The images of the two Milarepa paintings depicted here belong to a well known composition consisting of nineteen paintings in total narrating the complete life story of Milarepa. Although these two individual compositions and a third painting (the 1st painting in the set of nineteen) are the only known extant works from this specific copy of the painting set, another complete set exists in the Museum of Ethnography in Stockholm, Sweden. That set, acquired from Asia just after the turn of the last century, has been studied in detail with all of the inscriptions translated and published by Toni Schmid as 'The Cotton Clad Mila: the Tibetan Poet-Saint's Life in Picture,' Stockholm, 1952. (See Stockholm images).

The complete set of paintings was likely commissioned by a follower of the Drugpa Kagyu tradition of Tibetan Buddhism. The painting style is similar to - but not identical with - the Khampa Gar painting tradition of Lhatog descending from the master artist and Drugpa Kagyu hierarch Cho Tashi of the late 17th century.

From that published text of Toni Schmid the order of the two paintings within the larger set of nineteen compositions can easily be determined. The first of the two paintings can be identified as painting number two in the full set of compositions and should properly be identified as 'right one'. The second painting is number fifteen and identified as 'left seven'. These very specific location instructions are usually placed on the back of the painting at the top of the cloth mounts, either written on the cloth with ink, written on a scrap of cloth which is then sewn onto the cloth mount, or embroidered on a scrap of cloth and then attached to the cloth mount.

The first of these two paintings depicts the early life of Milarepa, his upbringing and relationships with his family members. The second of the two paintings depicts narratives that occur is much later in the life of Milarepa, after he had renounced the life of a householder and become a wander yogi. A key narrative vignette in the second composition is located at the middle left side when the student named Gampopa had asked for one more parting teaching from Milarepa. In response Milarepa turned his back to Gampopa and lifted up his robe exposing his heavily callused posterior. The meaning of this potentially rude gesture was to reenforce the importance of diligence and perseverance in practicing sitting meditation. 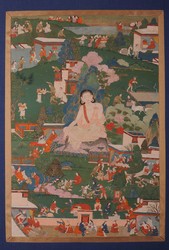 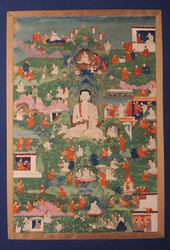 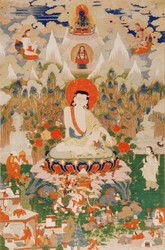