Ngagwang Lobzang Gyatso, 1617-1682 (ngag dbang blo bzang rgya mtsho), was born to a family of Nyingma practitioners in 1617 in the Yarlung Valley of Tibet, descendants of the Imperial line of the Yarlung Dynasty. His father was Miwang Dundul Rabten (mi dbang bdud 'dul rab brtan) and his mother was Kunga Lhadze (kun dga' lha mdzes). In 1622 he was identified as the rebirth of Sonam Gyatso by the First Panchen Lama Lobzang Chokyi Gyaltsen (paN chen bla ma blo bzang chos kyi rgyal mtshan), who had been the tutor to the Fourth Dalai Lama. The Panchen Lama gave him the name Lobzang Gyatso (blo bzang rgya mtsho) and enthroned him at Drepung ('bras spungs).

Lobzang Gyatso's recognition was not without controversy. The boy had been unsuccessfully claimed as the reincarnation of a Kagyu hierarch, the Fourth Tsurpu Gyaltsab Dragpa Dondrub (mtshur phu rgyal tshab grags pa don grub). At Drepung, he was in competition for the position of Dalai Lama with another candidate, Dragpa Gyaltsen (grags pa rgyal mtshan), who was later identified as the fourth incarnation of Panchen Sonam Dragpa (paN chen bsod nams grags pa), the Fifteenth Ganden Tripa (dga' ldan khri pa). Following the suspicious death of Dragpa Gyaltsen in 1656, the deity Dorje Shugden (rdo rje shugs ldan) appeared, embodying a lasting rift in the Gelug tradition between those who accept and those who condemn Nyingma elements within the tradition.

Upon taking the seat of the Dalai Lamas in Drepung, Lobzang Gyatso immediately assumed the ritual responsibilities of the office, presiding over the New Year's feast offering and the Saga Dawa festivities in the fourth Tibetan month. He also began his studies, with Lingme Shabdrung Konchog Chopel (gling smad zhabs drung dkon mchog chos 'phel) and the First Panchen Lama, in Prajnaparamita, Madhyamaka, Vinaya and Abhidharma. He also trained in grammar and poetics, astrology and divination, and related topics, with Mondro Pandita (smon 'gro paNDita), who later would advise his student to suppress the Jonang tradition.

The Fifth Dalai Lama studied with many of the leading lamas of his day. His record of 'received teachings' (gsan yig) fills four volumes. In it he lists the sutra and tantra instructions and the empowerments and transmissions he received, primarily from Gelug, Sakya, and Nyingma masters. His accomplishments were widely recognized, and he continues to be considered a significant lineage holder by the Nyingma. He trained with leaders of both the Changter (byang gter) and Zur tradition of the Kama (zur bka' ma). His family also maintained good relations with the Drugpa Kagyu - his cousin Pagsam Wangpo (dpag bsam dbang po) was the Fifth Gyalwang Drugpa (rgyal dbang 'brug pa).

In 1637, when Lobzang Gyatso was twenty-five, the Mongolian leader, Gushri Khan, came to Tibet with a contingent of eight hundred soldiers, ostensibly on pilgrimage, but almost certainly to assert control over Tibet and find native allies for their dominion. This was not unusual at the time - following the fracture of the Mongol peoples, leaders of various tribes had sought religious leaders in Tibet in an effort to reestablish the patron-priest (yon mchod) model created by Kubilai Khan and Chogyal Pagpa (chos rgyal 'phags pa) in the thirteenth century. It seems Gushri's reconnaissance mission was at the request of the Fourth Dalai Lama's treasurer, Sonam Chopel (bsod nams chos' phel), part of the latter's effort to find a Mongol ally in the fight against Tsang.

The Dalai Lama met with Gushri at this time and gave him the title of Tendzin Chogyal (bstan 'dzin chos rgyal), "holder of the teaching, king of dharma". It was a symbolic title, designed to cement relations, and it was effective - both the Dalai Lama and Gushri reported receiving visions in which they played a key role vanquishing the enemies of the Gelug tradition and spreading it far and wide. During this visit Gushri, the Panchen Lama, Sonam Chopel, and the Dalai Lama discussed plans for Gushri to invade Kham and destroy the Bonpo kingdom of Beri (be ri), the excuse for which was a forged letter in which the Beri King declared his intention to invade Lhasa.

In his autobiography, a work that is highly revisionist, the Dalai Lama wrote that Sonam Chopel secretly requested Gushri to follow his invasion of Kham with an attack on Tsang, thereby wiping out completely all rivals to Gelug dominance of Tibet. Gushri Khan began his invasion in 1639, overrunning Kham from top to bottom and utterly obliterating Beri. Instead of turning north and returning to Mongolia, Gushri then continued into Tibet. The Dalai Lama claims that he was horrified by this and demanded that Sonam Chopel undo his work and convince Gushri to turn back, which he refused to do, evermore to hold the blame for Gushri's violence. Gushri laid siege to Shigatse for roughly a year, ultimately crushing all resistance and taking control of Tsang.

Contrary to standard accounts, Gushri did not then hand control of Tibet over to the Dalai Lama. Rather, Gushri declared himself King of Tibet (bod gyi rgyal po), and was given an actual throne by the Tibetans on which to sit. He appointed Sonam Chopel as his regent, in charge of political maters, and he gave the Dalai Lama control of religious affairs. This fact is largely obscured in history, thanks to the Dalai Lama's own account of the events, written many decades later, after he had assumed political control of Tibet.

The Dalai Lama spent the next several decades consolidating power, a process that involved the construction of a palace, naming himself an emanation of the bodhisattva Avalokiteshvara (who had long been considered the patron protector of Tibet), a state visit to Beijing, and the invocation of the Golden Age of the Tibetan Empire.

In 1645, the Fifth Dalai Lama began the construction of the Potala Palace on Red Hill (mar po ri) in Lhasa, named after the pure land of the Avalokiteshvara, Potalaka, and placed on the site of the 7th century Tibetan Emperor Songtsan Gampo's (srong btsan sgam po) capital. Gushri Khan joined him for the consecration of the site. The naming of the palace contributed to the dissemination of the identification of the Dalai Lama as an emanation of Avalokiteshvara, something the Dalai Lama himself contributed to with his biographies of his previous incarnations into which he inserted the names of previously recognized emanations such as Songtsan Gampo and Dromton ('brom ston).

The Dalai Lama's own account has it that the Emperor met him outside of Beijing, as he had requested, although he admits to sitting on a lower seat than the Emperor and that he refused to drink his tea first, as the Emperor offered to allow. However, other sources make clear that the meeting took place in Beijing, and that the Dalai Lama, not satisfied by his treatment, left the capital after only six months. During his return the Emperor conferred a seal and a title, expressing his understanding that the Dalai Lama had accepted Chinese authority over Tibet.

The effect of the Beijing meeting was almost immediate. In 1657 the Dalai Lama received a letter from the Shunzhi emperor regarding a request by the remnant of the Pagmogru family to renew their Ming-era title. As the Ming had affirmed Jangchub Gyaltsan's (byang chub rgyal mtshan) rule in Tibet in the 14th century, and subsequent Pagmogru kings had renewed the title, Shunzhi wished to know whether or not the Dalai Lama was in fact ruler of Tibet. The fact that the letter came to the Dalai Lama, and not a regent or Mongolian prince (Gushri had died in 1655) in residence in Lhasa, suggests that by the mid-1650s the Dalai Lama had firmly taken control of the government in Tibet, and he wrote back affirming that he was indeed King.

Another means employed by the Dalai Lama to consolidate power in Tibet was the removal of all remaining rivals. Because of Taranata's efforts in support of Tsang before the Mongol invasion, the Dalai Lama was persuaded to suppress the Jonang tradition as retaliation. In 1650 he sealed and banned the study of shentong (gzhan stong), the Jonangpa's signature teaching, and prohibited the printing of Jonang shentong texts. In 1658 he forcibly converted Taranata's monastery, Tagten Puntsog Choling (rtag brtan phun tshogs gling). Only the skillful intervention by the Fifth Tsurpu Gyaltsap Dragpa Chogyang (mtshur phu rgyal tshab grags pa mchog dbyangs) prevented the Karma Kagyu from suffering the same fate, and that tradition was forced only to return monasteries it had converted during the height of the Tsang kings' power.

The Fifth Dalai Lama did not submit entirely to pressure from within the Gelug establishment to utterly eliminate all other religious traditions. He remained a fervent supporter of the Nyingma, sending Dzogchen Pema Rigdzin (rdzogs chen padma rig 'dzin, 1625-1697) to Kham to establish Dzogchen Monastery, in 1680s, and maintained a large number of Nyingma associated, to the consternation of the more conservative Gelug hierarchs. He also revealed treasure, through visions, producing two volumes of revealed scripture. These he transmitted to the Nyingma masters Terdag Lingpa (gter bdag gling pa, 1646-1714 ) of Mindroling (smin 'gro gling) and Rigdzin Pema Trinle (rig 'dzin padma 'phrin las, 1641-1717) of Dorje Drag (rdo rje brag).

Under the Fifth Dalai Lama Lhasa flourished. Foreign traders and intellectuals flocked to the city, contributing greatly to the arts, medicine, and architecture. He established a wide infrastructure of taxation and administration, both in secular and religious matters. He was also a prolific author, writing both histories and religious commentaries, which are collected in more than thirty large volumes.

The circumstances of the Fifth Dalai Lama's death are famously confused. His regent (according to some, his son, although this has been largely discounted), Desi Sanggye Gyatso (sde sri sangs rgyas rgya mtsho) concealed the knowledge of the Dalai Lama's passing, in 1682, for almost fifteen years. In the meantime he himself continued to consolidate Gelug rule of Tibet, and had the Dalai Lama's remains mummified and placed inside an elaborate tomb. He also identified the reincarnation, so that in the same year that he announced the death of the Great Fifth, he oversaw the enthronement of the fifteen year old Sixth Dalai Lama.

Ishihama, Yumiko. 1992. "A Study of the Seals and Titles Conferred by the Dalai Lamas." In Tibetan Studies: Proceedings of the 5th Seminar of the International Association for Tibetan Studies, Narita 1989, edited by Ihara Shoren and Yamaguchi Zuiho. Narita: Naritasan Shinshoji.

Ishihama, Yumiko. 1993. "On the Dissemination of the Belief in the Dalai Lama as a Manifestation of Bodhistattva Avalokitesvara." Acta Asiatica 64: 38-56.

Karmay, Samten G. 1998. "The Fifth Dalai Lama and his Reunification of Tibet." In The Arrow and the Spindle: Studies in History, Myth, Rituals and Beliefs in Tibet, edited by Samten G. Karmay. Kathmandu: Mandala Book Point, pp. 504-517.

Karmay, Samten G. 1998. "The Gold Seal: the Fifth Dalai Lama and Emperor Shun-chih." In The Arrow and the Spindle: Studies in History, Myths, Rituals and Beliefs in Tibet. Kathmandu: Mandala Book Point, pp. 518-531.

Richardson, Hugh. 1980. "The Fifth Dalai Lama's Decree Appointing Sangs-rgyas rgya-mtsho as Regent." Bulletin of the School of Oriental and African Studies 43, no. 2: 329-344.

Yamaguchi, Zuiho. 1995. "The Sovereign Power of the Fifth Dalai Lama: sPrul sku gZims-khang-gong-ma and the Removal of Governor Nor-bu." Memoirs of the Research Department of the Toyo Bunko 1995: 1-27.

Yamaguchi, Zuiho. 1999. "The Emergence of the Regent Sangs-rgyas-rgya-mtsho and the Denouement of the Dalai Lama's First Administration." Memoirs of the Research Department of the Toyo Bunko 57: 113-136. 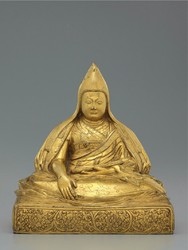 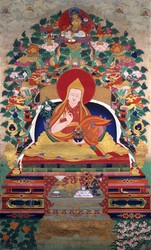 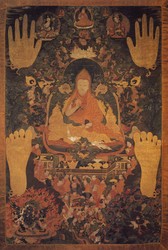