This set of five paintings was commissioned in Northern India in 2007/2008 and depict the historical Buddha Shakyamuni in the first composition and four famous teachers belonging to the Nyingma, Sakya, Kagyu and Gelug Traditions in the accompanying four paintings.

Shakyamuni Buddha is surrounded by the Six Ornaments & Two Excellent Ones of the Southern Continent. For the Nyingma Tradition Longchenpa Drime Ozer is depicted. For the Sakya it is Sakya Pandita Kunga Gyaltsen. For the Kagyu it is Milarepa Zhepa Dorje and for the Gelug it is Tsongkapa Lobzang Dragpa. Each figure, major and minor, in the five painted compositions is accompanied by a name inscription written in Tibetan 'U-chen' script. 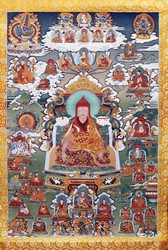 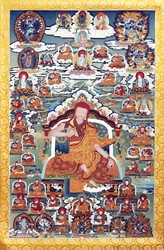 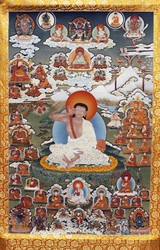 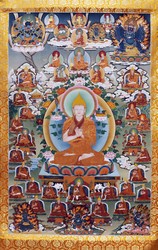