Dance is a common theme in Indian and Himalayan art and well represented in Tantric Iconography - Buddhist and Hindu. A well known form of Shiva is in the appearance of 'The Lord of Dance' (Shiva Nataraja). Many forms of Avalokiteshvara are in a dancing posture as are Hevajra, Vajrayogini, Kurukulla and many other Buddhist deities. The Tibetan teacher Machig Labdron is depicted in a dance posture imitating Vajrayogini. A number of Tibetan biographical paintings depict narrative scenes including dance (Tibetan: cham). The highest classification of Buddhist Tantra, Anuttarayoga, uses common life metaphor and simile as models for Tantric systems. A Tantric form of Avalokiteshvara uses the metaphor of dance to explain complex models, ideas and mnemonic symbolism.

Dance appearance is easy to recognise. Typically a simple dancing figure has two legs, one of the legs is raised up and the standing leg is somewhat curved and pressed to the ground. Males in a dance posture generally stand on the right leg and females on the left. It does become increasingly more complicated as the number of legs increase as with some forms of Hevajra. Dance posture should not be confused for Yoga Appearance where some yogis and siddhas are depicted in a standing posture performing a yoga asana.

The Buddhist Tantric texts speak of nine emotions of dancing, three of body, three of speech and three of mind. In Anuttarayoga Tantra a dancing figure (deity) must express physically these nine emotions through posture, gesture, facial expression and attire. (See the Dance Outline Page). 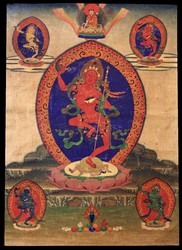 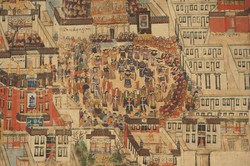 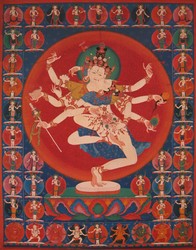 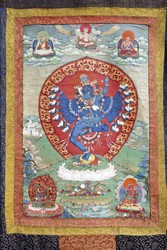