The arhat paintings below all belong to sets of compositions which depict the Buddha Shakyamuni, the two principal disciples, the Sixteen Great Arhats, two attendant figures and the Four Guardian Kings. Arhats are not depicted or created in art to represent a solitary individual figure but rather only created in this large group of twenty-five individuals which represent the earliest teachers and students of Buddhism. The function of paintings such as these in Tibetan Buddhism is to represent the Hinayana, the earliest of the Three Vehicles of Buddhism: [1] Hinayana, [2] Mahayana and [3] Vajrayana.

Each of the sixteen arhats has specific iconographic features and an accompanying narrative. 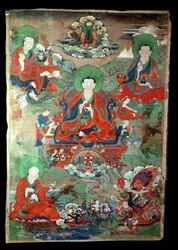 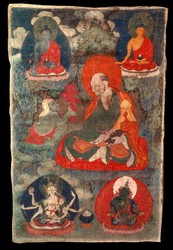 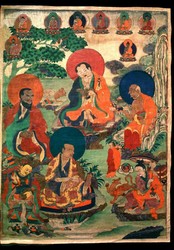 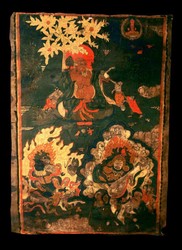