Thimphu Tango Shedra (site name: Tango Shedra; location: Thimphu district). When Phajo Drugom Zhigpo (pha jo 'brug sgom zhig po, 1184-1251), a Drukpa Kagyu Buddhist practioner, first arrived in the Land of the South (Bhutan), he looked up at a cliff and saw in it the image of his tutelary deity, Tamdrin (Hayagriva). Phajo Zhigpo took up residence near the cliff and stayed there with his consort Sonam Peldron, with whom he had seven children. (He had one other child, a daughter, with a previous consort.) Today, this cliffside site has a small temple and a cave site (Kyiphug Nyima), but the large monastic college (shedra) built nearby in the 17th century overshadows it. Tango has hosted a number of religious masters, including the often-bawdy Buddhist master Drukpa Kunley ('brug pa kun legs). The founder of modern Bhutan, Zhabdrung Ngawang Namgyal (zhabs drung ngag dbang rnam rgyal, 1594-1651), spent significant time at Tango soon after his arrival in Bhutan from Ralung. The Fourth Druk Desi, Tenzin Rabgye ('brug sde srid 04 bstan 'dzin rab rgyas, 1638-1696, r. 1680-1695) was responsible for building the structure in 1681, and he took up residence there during different periods of his life. One room of the Tango complex is his former bedroom, the Desi Zimchu, the walls of which are covered with intricate paintings of Buddhist masters said to be by the hand of Tenzin Rabgye himself. The main image in the ground floor temple is a large gold Buddha crafted by the Nepalese sculptor Panchen Deva, and other works in the complex are attributable to Tulku Dzing and Druk Choephel. Tango Shedra is one of the most important sites for the study of history Bhutanese art. For more information, see "A Brief History of Tango Monastery" by Tshenyid Lopen Kuenleg, Journal of Bhutan Studies, Summer 2000, as well as The Dragon's Gift: The Sacred Arts of Bhutan, Chicago: Serindia, 2008. 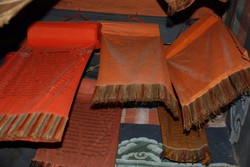 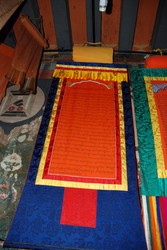 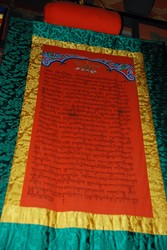 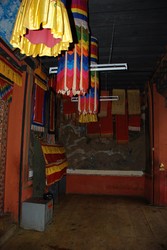 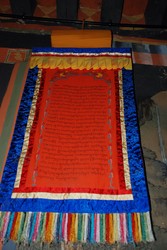 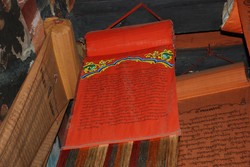 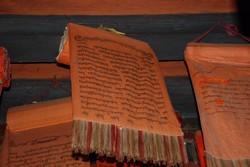 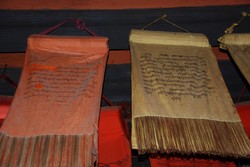 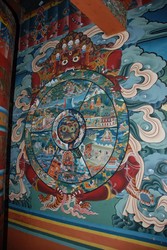 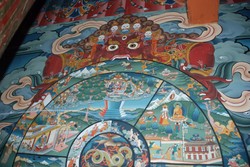 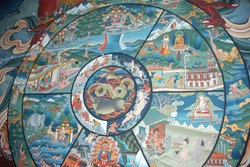 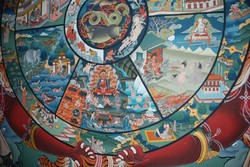