Formal in appearance, the Shakyamuni Buddha gazes forward with partially closed eyes and the blue-black hair on the head is piled in a tuft on top with a single gold ornament adorning the crown. Between the eyebrows is a white dot (urna) and adorning the neck are three curved horizontal lines. The earlobes are long and pierced. With the right arm bare, both hands perform the gesture of teaching at the heart with the 'wheel-turning' mudra. Across the left shoulder is a saffron coloured patchwork robe. A similar lower garment is tied at the waist with a cloth belt. The legs are folded in vajra posture. Standing at the right and left sides are the two principal disciples of the Buddha, Shariputra and Maudgalyayana. Above to the right and left are two small rainbow spheres containing two Tibetan teachers wearing monastic robes.

Outer Register: In the top register and descending to the left and right and finishing at the bottom center are the Sixteen Great Arhats. Note that there is no image of the Chinese patron - Hvashang. 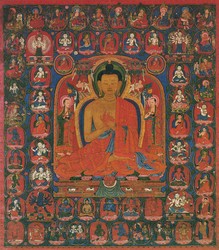 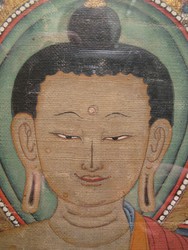 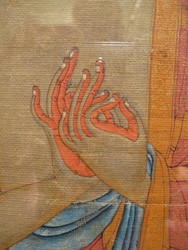 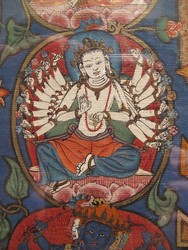 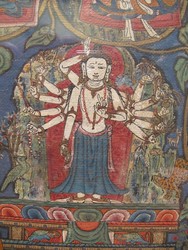 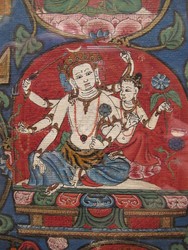 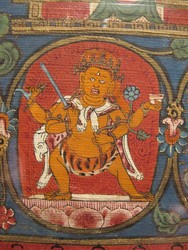 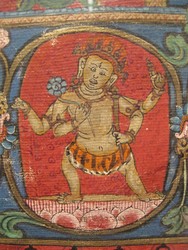 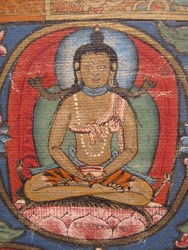 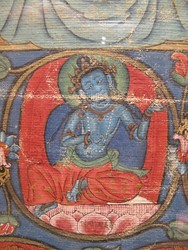 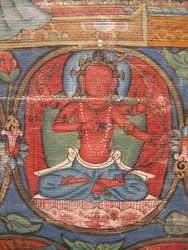 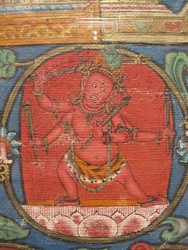