Manjushri in a relaxed sitting posture is a popular form in Indian, Nepalese and Tibetan sculpture. In this iconographic style Manjushri is typically depicted in a seated posture with the right knee raised and the wrist or elbow of the right arm resting atop the knee. The left hand is pressed downward onto the seat slightly behind the horizontal left leg. The upper torso of the body and head generally display a pronounced curve imitating the 'tribanga' form of standing figures.

Identification: Manjushri is identified by the book, or cylinder, above the utpala flower blossom, along with the lack of Maitreya and Avalokiteshvara attributes.

Both hands can each hold the stem of a flower blossom. Usually the right hand holds a lotus blossom and the left an utpala (lily, iris). In a number of examples the left flower blossom supports a book or text representing the Prajnaparmita Sutras. The sculptural form representing the text on the left flower is sometimes in the shape of a cylinder. This is actually depicting a metal tube which is the outer box or container for the sutra text.

Again, with some examples of Manjushri in this form he is wearing a type of meditation belt extending around the waist on the proper left side and circling around the right leg just below the knee.

This form of Manjushri appears to be non-iconic from a Tantric perspective. This means that it is not a Tantric deity form based on a particular Tantric text and described in a sadhana meditation practice. It is more likely to be an image of Manjushri following from the Mahayana Sutras and appearing in this particular form based on a popular artistic convention. It can be called popular because of the number of sculptural examples following this particular depiction with slight variations in appearance such as how the right arm is placed on the knee, ornaments, etc. The general arrangement of the legs and body posture are the same for all of the examples.

There are iconographic examples of Avalokiteshvara in which he appears very similar in posture and general appearance to Manjushri as depicted in these examples. The main differences in form are the padma and utplala flower, the appearance or lack of appearance of Amitabha on the crown of the head, the presence of a sword or book on the left hand side flower blossom, tiger claw style necklace, the presence of a deerskin over the left shoulder, meditation belt, etc. These are the key iconographic characteristics of which some are unique to Manjushri and others unique to the form of Avalokiteshvara. To identify a sculpture as Manjushri then the sword and book, or just one or the other, must be present. Two of the examples below have a type of meditation belt wrapped around the upraised knee. It is not clear if this is in fact an Indian origin for the ever present Tibetan meditation belt (gom tag). Lokeshvara and Maitreya have yet to be found wearing a similar meditation belt. Is this an additional uniquely identifying characteristic for Manjushri alone?

Simhanada Avalokiteshvara is identical in body posture to the relaxed Manjushri, however, he has a number of very unique and immediately recognizable distinct visual characteristics which make him readily identifiable such as the lion seat, trident and snake staff, two lotuses and a skullcup, and a general lack of ornaments.

Two other popular forms of Avalokiteshvara are Khasarpani and 'Resting in the Nature of Mind.' This last form has some similar iconographic characteristics that are shared with Manjushri 'in a relaxed posture,' but again, there are very pronounced differences as well. The 'Resting in the Nature of Mind' form has the right leg extended downward and the right arm also extended forward. the hand is turned palm upwards in a gesture of generosity. The flower blossoming on the left side is unmistakably a padma (lotus) rather than an utpala. A krishnasara deerskin adorns the left shoulder. 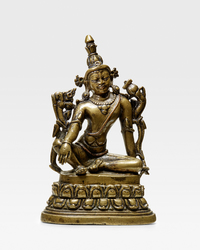 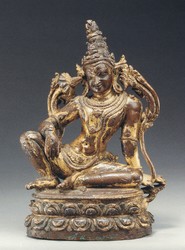 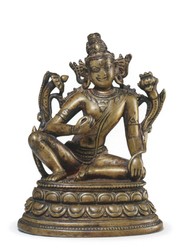 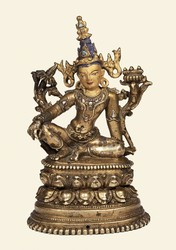 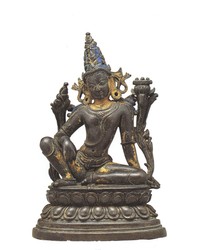 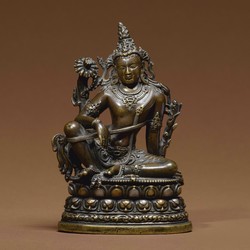 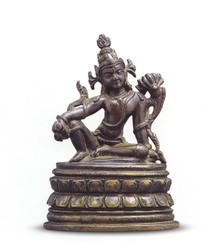 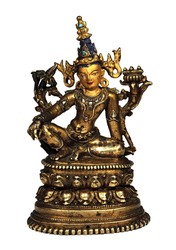 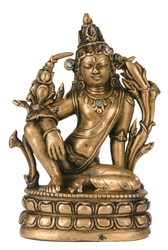 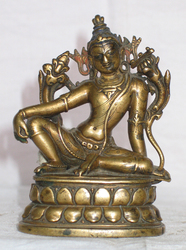 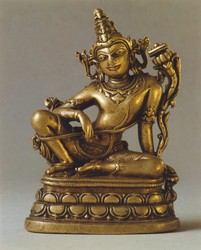