Manjushri 'holding a book' is an iconographic characteristic of several different forms of Manjushri - all of which are meditational deities (yidam, ishtadevata). These forms according to Tantric classification belong to the Kriya, Charya and Yoga Tantras. Early textual descriptions, prior to the 13th century, often place the text of the Prajnaparamita in the left hand and next to the heart of Manjushri. Over the centuries the depicted iconography of these Manjushri forms changes. The Prajnaparamita book gets moved, relocated, to the top of a blue utpala flower blossoming next to the left ear, with the stem held between the ring finger and thumb, in the right hand of Manjushri.

The most popular forms of Manjushri undergo the relocation of the text. Some less popular and much less commonly depicted forms of Manjushri are still described and depicted holding the text but the majority of depictions have adopted the new utpala and Prajnaparamita iconography. Short descriptions based on an edited version of the Bari Gyatsa follow below:

[2] "Lord Manjushri Sthira Chakra Bhavana, with a colour like fresh saffron, one face, two hands, the right holding aloft a sword and the left holding to the heart the One Hundred Thousand [versed] book; having jewel ornaments and garments of silk. Seated with the feet in the vajrasana [posture]."

[3] "White Lord Manjushri Arapachana, holding in the right [hand] a sword [and in] the left a book, in the same manner as before, with ornaments, garments and seated."

[8] "Vidhyadhara Pitaka Samkshepta: [Above] a lotus and moon is white Manjushri Arapachana. Holding a sword and a book, the same ornaments and garments, seated in the lalitaraja [posture]."

[10] "White Dharmadhatu Vagishvara, with four white faces, eight hands, the first two in the Dharma teaching gesture. The three lower right hold a sword, arrow and vajra. The three lower left, a Prajnaparamita book, bow and bell. With the same ornaments and garments. Seated in the vajrasana [posture]."

[11] "Manjushri Namasangiti: Lord Manjushri, with three faces and four hands. Having a reddish tinge the body and main face are white. The first two hands hold a sword and book, the lower two an arrow and bow, with the same ornaments and garments." (Konchog Lhundrub, 1497-1557).

With regard to Arapachana Manjushri and body colour, in the early literature he is described as white. In the 11th century a change occurs and Arapachana begins to be described as yellow or red/yellow - orange. From the teacher Bari Lotsawa Rinchen Drag (1040-1112) a form of Arapachana was passed down to Sachen Kunga Nyingpo. This form came to be called the Uncommon Sakya Tradition Orange Arapachana Manjushri. Over time Orange Manjushri became the most popular form of Manjushri practice in the Sakya Tradition along with the Jonang and the Gelug Traditions. 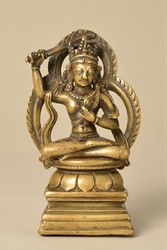 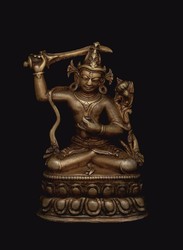 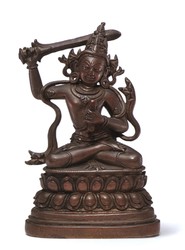 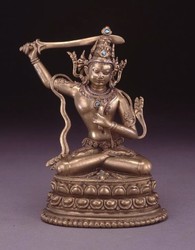 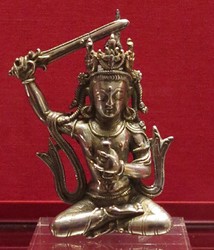 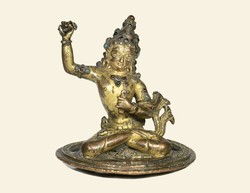 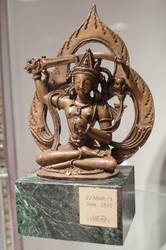 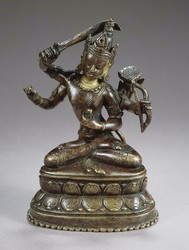 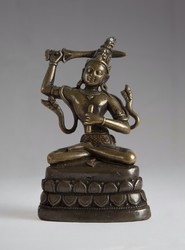