Following the example of his predecessors, the Sixth Karmapa, Tongwa Donden (karma pa 06 mthong ba don ldan, 1416-1453), is said to have identified himself as the Karmapa as an infant when he crossed paths with a student of the previous Karmapa. He was enthroned by the Third Zhamar, Chopel Yeshe (zhwa dmar 03 chos dpal ye shes, 1406-1452) and received teachings from him, Jamyang Drakpa ('jam dbyangs grags pa, d.u.) and Khenchen Nyepuwa. He received the full Kagyu lineage transmission from Ratnabhadra (rat+na b+ha dra, d.u.), who had been the Fifth Karmpa's principal lineage holder.

Tongwa Donden began to teach from a very young age, and focused on composing group liturgies for the Karma Kamtsang school, which up until then had focused mainly on meditation. He incorporated the Shangpa Kagyu, Zhije, and Chod lineages into the main line of Kagyu transmission, and dedicated himself to composition, teaching, restoring monasteries, and developing the monastic university system.

Shortly before his death, he appointed the First Tsurpu Gyeltsab, Peljor Dondrub (mtshur phu rgyal tshab 01 dpal 'byor don grub, 1427-1489) as his regent and predicted the location of his subsequent rebirth, after which he entered into retreat. His main lineage holder was Jampel Zangpo ('jam dpal bzang po, d.u.) who authored the Dorjechang Tungma (rdo rje 'chang thung ma), the short lineage prayer that is now widely used across the Karma Kagyu school. Tongwa Donden passed away in 1453 at the age of thirty-eight. 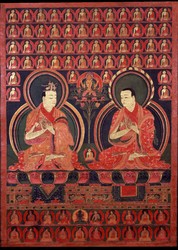 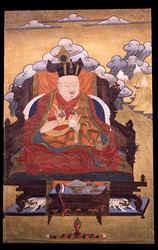 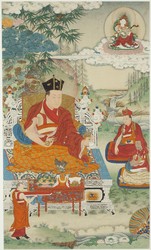 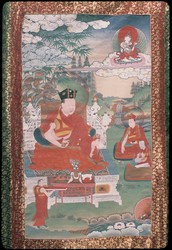