"...Bhagavani Pratisara, with a body white in colour, one face and two arms. The right [hand] holds aloft a wisdom sword to the sky. The left [hand] holds to the heart a gold wheel with eight spokes. Wearing various heavenly clothes as an upper and lower garment, the hair on the head in black braids, some falling loose, [some] tied on the crown of the head, adorned with ornaments of jewels and fresh flowers, youthful and sixteen years of age, standing with the two feet apart in a [squatting] manner (yantra)." (Konchog Lhundrub (1497-1557 [p783]). (Drub Tab Kun Tus, vol.6, pages 155-156).

"...Pratisara, with a body white in colour, one face, and two hands. The right [hand] holds a sword aloft [and the] left a white wheel to the heart. The two legs are standing in a [squatting] round manner. Beautiful and smiling, adorned with all of the heavenly garments and precious ornaments." (Rinjung Gyatsa, page 513. Jonang Taranata 1575-1634).

The Jonang lineage for Pratisara is the same as the lineage above until it reaches the 16th century and then branches off with teachers such as Kunga Drolchog and Jonang Taranata. 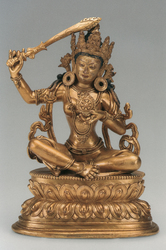 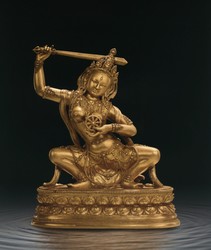 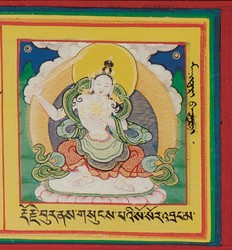 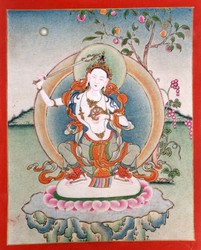