Taranatha (tA ra nA tha) was born at Karak (kha rag) in 1575, into the hereditary line of the great Tibetan translator Ra Lotsawa Dorje Drak (rwa lo tsA ba rdo rje grags). His Tibetan name was Kunga Nyingpo (kun dga' snying po), but he is generally known by the name Taranatha, which he received in a vision from a great Indian adept.

According to tradition, when he was about one year old he declared, “I am master Kunga Drolchog!” But this was kept secret for several years, and it was not until he was about four years old that he was brought to Kunga Drolchog's (kun dga' grol mchog, 1507-1566) monastery of Cholung Jangtse (chos lung byang rtse) and formally recognized as his incarnation. He then began years of intense study and practice under the guidance of a series of great masters, many of whom had been major disciples of Kunga Drolchog.

Kunga Drolchog's disciple Dragtopa Lhawang Dragpa (brag stod pa lha dbang grags pa, d.u.) taught Taranatha many esoteric instructions, especially the Six Yogas and Mahamudra, which caused a sublime primordial awareness to arise in the young prodigy's mind. Jedrung Kunga Pelzang (rje drung kun dga' dpal bzang, 1513-1588), who was Kunga Drolchog's nephew and successor on the monastic seat of Jonang Monastery, transmitted to Taranatha the teachings of Kalachakra and the dharma protector Mahakala that he had received from his uncle.

From Kunga Drolchog's disciple Lungrig Gyatso (lung rigs rgya mtsho, d.u.), Taranatha received many transmissions, especially the Kalachakra initiation, the explanation of the Kalacakra Tantra, the esoteric instructions of the Six-branch Yoga according to the Jonang tradition, and the collected writings Dolpopa Sherab Gyeltsen (dol po pa shes rab rgyal mtshan, 1292-1361). He is said to have gained a special experiential realization when he practiced the Six-branch Yoga.

When Taranatha was fourteen years old, the Indian adept Buddhaguptanatha (d.u.) arrived in Tibet. This master became one of Taranatha's most important teachers, passing to him countless transmissions of tantric initiations and esoteric instructions. Taranatha stated that his understanding of the secret mantra teachings was due to the kindness of Buddhaguptanatha alone.

Several other Indian yogins and scholars, both Buddhist and non-Buddhist, came to Tibet during Taranatha's lifetime, such as Balabhadra, Nirvanashri, Purnananda, Purnavajra, and Krishnabhadra. They gave him instructions, taught scholarly topics, and joined him in translating Sanskrit manuscripts into Tibetan. Several of Taranatha's translations are now included in the Tibetan canonical collections of the Kangyur and Tengyur.

In 1588 Jedrung Kunga Pelzang, who had followed his uncle Kunga Drolchog as holder of the monastic seat of Jonang Monastery, enthroned Taranatha at Jonang, although a formal ceremony of investiture did not occur until 1595. Taranatha took upon himself the responsibility of causing Dolpopa's insights to once again reach a wide audience. He was determined to revive what he saw as a priceless transmission lineage in danger of being lost.

During the 1590s the instruction manual of Dolpopa's heir Chogle Namgyal (phyogs las rnam rgyal, 1306-1386) was still being used at Jonang to teach the Six-branch Yoga, but very few people understood the philosophical tenet of Dolpopa and his disciples. Taranatha was even more concerned that some of the previous holders of the monastic seat of Jonang had given initiations and instructions according to the Jonang tradition, but had at the same time criticized and refuted Dolpopa's vajra proclamations of the ultimate view of zhentong, which Taranatha felt was the secret teaching of all the buddhas and bodhisattvas. He now felt the need to defend the original views of Dolpopa through refutation of erroneous opinions, and to establish the correct interpretations according to his lineage.

During this period Taranatha's teacher Jampa Lhundrub advised him to restore the great stupa that Dolpopa had built about 260 years before at Jonang. Taranatha put all his energy into the project. Just before the restoration work was finished, it is said that he had a marvellous vision one morning. The earth and sky seemed filled with countless people of all descriptions going in the same direction. He joined with them and arrived in a red, triangular valley with an incredible crystal mountain in the center. The mountain was totally filled with amazing stupas of different sizes, and in each stupa infinite buddhas and bodhisattvas were speaking back and forth about the dharma. Flowers fell from the sky like rain, and many other miraculous signs occurred. All of the people were making offerings to the crystal mountain filled with stupas, and chanting a series of verses in unison. Awestruck, Taranatha asked about the mountain, and was told that it was the Dhanyakataka Stupa, where the Buddha is believed to have first taught the Kalacakra Tantra. Taranatha later felt that perhaps this vision had occurred because everyone had been working so intensely to complete the restorations of the great stupa at Jonang.

In 1604, after a decade of efforts to revive the original Jonang teachings, all of Taranatha's work was threatened by serious political conflict between the regions of Jang (byang) and Tsang. Jonang Monastery itself was in immediate danger of being attacked by hostile armies. While meditating at Dolpopa's great stupa, Taranatha became despondent, and, seeing all his efforts about to be wiped out and the tradition itself perhaps destroyed, wished only to go into retreat far away from all the troubles created by deluded and impassioned people. But Dolpopa then appeared to him in a vision, encouraged him to continue as before, and assured him that his efforts would not be in vain. The next night Taranatha prayed to Dolpopa and experienced a vision of a bodhisattva who spoke a quatrain of verse. As a result of these events, Taranatha said he gained realization of Dolpopa's true intentions as expressed in his zhentong teachings, and all his uncertainties and doubts were completely removed. He felt that a great key had been placed in his hands to open the doors of all the Buddha's doctrine. As an expression of his realization he composed a versified text entitled Ornament of the Zhentong Middle Way (gzhan stong dbu ma'i rgyan), which is one of his most important works solely devoted to the explication of the zhentong view. Taranatha said that he received several prophecies from Dolpopa, and thereafter met him many times, both actually and in dreams. He further commented, “That is the reason I am now an expert in the great omniscient Dolpopa's view and preserve his true intentions.”

Taranatha had countless such visions during his life. For example, many times during the years 1618 and 1619 he experienced visions of the Kalapa court of the Shambhala emperors, beheld the rulers themselves, and heard their teachings. He felt that these visions were a result of his belief that the ultimate view of all sutras and tantras was zhentong Madhyamaka.

In 1615 the powerful Tsang ruler Desi Puntsok Namgyel (sde srid phun tshogs rnam rgyal) provided a special piece of land and the necessary supplies and workers to begin construction of a monastery to serve as a center for the teachings of the definitive meaning of the Buddha's doctrine. This monastery, which was finally completed in 1628, became Taranatha's main residence and was known as Takten Damcho Ling (rtag brtan dam chos gling).

Shortly before his death, Taranatha appointed his disciple Sanggye Gyatso (sangs rgyas rgya mtsho, d.u.) as his successor on the monastic seat of Takten Damcho Ling and made many prophetic statements about the Jonang tradition and the great political troubles that would soon sweep through Tibet. Unfortunately, Sanggye Gyatso passed away not long after Taranatha himself. Thus another of the great master's disciples, Kunga Rinchen Gyatso (kun dga' rin chen rgya mtsho, d.u.), was appointed to the monastic seat and led the Jonang tradition for the next fifteen years.

(Cyrus Stearns is a scholar based in Washington State, USA. He received his Ph.D. from the University of Washington in 1996). [Extracted from The Treasury of Lives, Tibetan lineages website. Edited and formatted for inclusion on the Himalayan Art Resources website]. 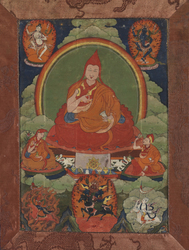 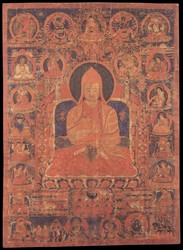 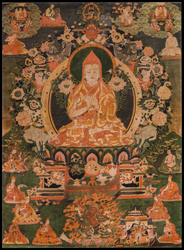 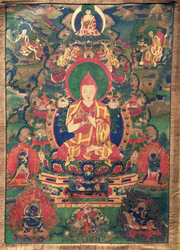 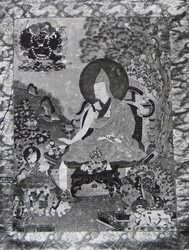 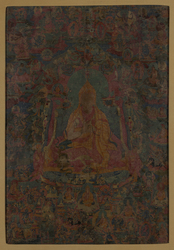 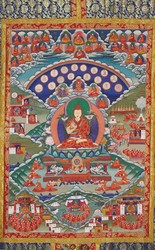 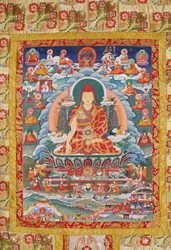 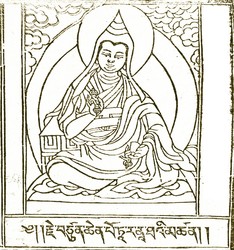 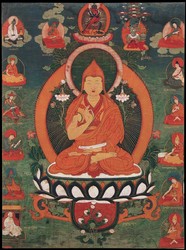