Ravigupta/Suryagupta (Tibetan: nyi ma be pa): from the set of Eighty-four Mahasiddhas according to the text and list of the Indian scholar Vajrasana of Bodhgaya (11th century). Suryagupta was a layperson from Kashmir that was cured of leprosy by a miraculous statue of the goddess Tara. Ravigupta is famous for having many visions of Tara and originating many lineages of her practice such as the Twenty-one forms of Tara, Vajra Tara, Seventeen Deity Tara practice, etc.

The Twenty-one Deity Tara of Suryagupta is iconographically significantly different from the Twenty-one Taras of Atisha, the Sadhanasamucchaya and others. The Seventeen Deity Tara is unique because the conjoined couple of Tara and Amoghasiddhi present Tara as the central figure.

The Cycle of the Tara transmitted by Ravigupta (nyi ma sbas pa).

It is said that in the country of Kashmira there had been an image of the Ta'u Tara endowed with miraculous powers (siddhi) in the Temple of rang byung lha lnga, lepers after worshiping the image were cured of their ailment.

About that time the acharya Ravigupta (nyi ma sbas pa), who was learned in the five sciences and especially in the Tantra, was attacked by leprosy (klu'i gnod pa). He built a hut for himself to the west of the vihara, and prayed for three months. Then the {R1051} temple's gate moved (by itself) westwards, and the Tara said: What is your wish? and the acharya replied: I wish to be cured of leprosy. In that very moment his entire body, except for a small sore on his forehead, assumed its former appearance. He asked: What was the reason for not curing the sore on the forehead? The Tara replied Formerly you were born as a hunter, killed animals and in the end set fire to a forest. In consequence of this, you were reborn in Hell and this is your last rebirth of the 500 rebirths in Hell, and saying so, she bestowed on him the sadhana, accompanied by a stotra. The Tara said with their help, one may perform any kind of magic rite. I shall grant you miraculous powers (siddhi).

In general, the cycle of the Tara (transmitted) through different Lineages filled Tibet.

The Chapter on miscellaneous doctrines. 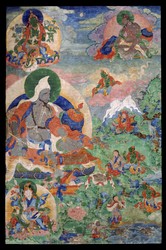 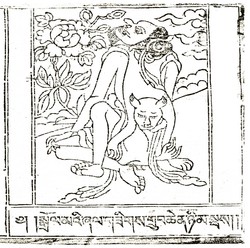