There are a number of different forms and traditions of the Eleven-faced Lokeshvara, a universal form of Avalokiteshvara. He can be seated or standing. There are two important Sanskrit source texts. In one text it describes eight faces without mentioning the number of hands. In the other text it describes one thousand hands without mention the number of faces. These two texts appear to have given rise to the many different variations of forms.

History: At one time the bodhisattva Avalokiteshvara made a promise that should he give rise to thoughts of self benefit may the head break into 10 pieces and the body into 1000. After continuously witnessing the misery of beings in various states of existence, discouraged, he gave rise to thoughts of seeking only his own happiness. At that very instant the head and body shattered. Calling out to Amitabha, the Buddha came forth and spoke words of encouragement. Gathering up the 10 pieces of the head Amitabha constructed 10 faces - representing the 10 perfections. Gathering the 1000 pieces of the body he constructed another with 1000 hands each with an eye on the palm - representing the 1000 buddhas of the Golden Eon. Finally he placed a duplicate of his own head at the crown - illuminating the entire threefold universe. This story is found in the apocryphal Tibetan text called the Mani Kabum. In that text it also describes how Tara appears from a tear drop coming from Avalokiteshvara's right eye and the goddess Bhrikuti appears from a tear drop of the left eye. Both Tara and Brikuti are manifesting, like the other enlightened figures, to assist Avalokiteshvara on the path of benefiting all beings and reaching enlightenment. Some modern tellings of the story name the two goddesses as Green Tara and White Tara. 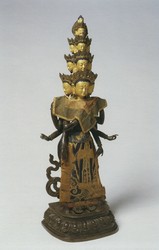 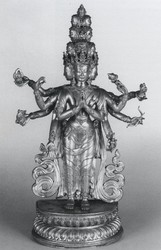 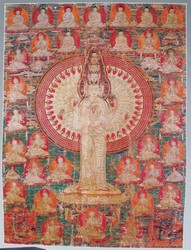 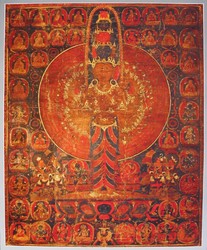 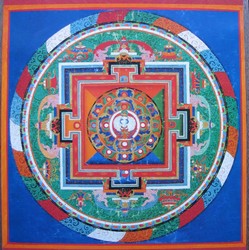 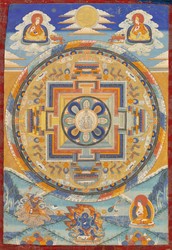 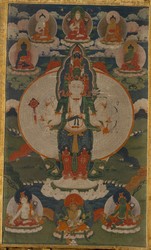 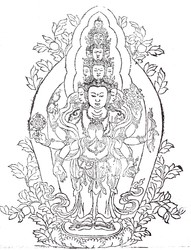 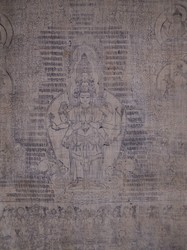 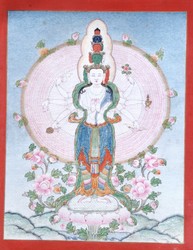