There are a number of different forms and traditions of the Eleven-faced Lokeshvara. The original Sanskrit source literature is the Arya Avalokiteshvara Ekadashamukha Nama Dharani. In this text there is only a mention of the eleven faces with no mention of colour or arrangement of the faces. There is also no mention about arms, or number of arms.

With the form of Lokeshvara having one thousand arms the source literature is the Maha Karunika Dharani Sutra where the one thousand arms are clearly stipulated. In that text there is no mention of faces, even one face or any number of faces.

Both of the texts have a dharani for Lokeshvara and that dharani appears to be the same for both and approximately one hundred syllables in length. A short mantra is also taught in the later traditions of the Eleven Faced and Thousand Armed Lokeshvaras, although no short mantra is found in the two early texts. The short mantra is borrowed from the Karandavyuha Sutra - om mani padme hum. 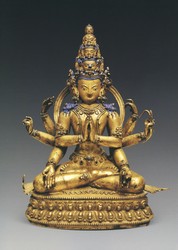 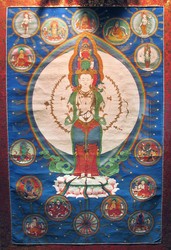 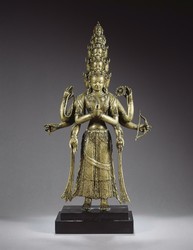