Traditional/Textual: A traditional program of iconographic composition for paintings is where the central subject and surrounding figures of a specific Tantric Cycle are the main focus. In such a composition the majority of figures represented in the painting are all related directly to a single textual tantric system. Examples are the Tattvasamgraha, Maha Vairochana Sutra, Sarva Durgati Parishodhana Tantra, Chakrasamvara Tantra, Guhyasamaja Tantra, Hevajra Tantra, etc.

Conventional/Constructed: Examples of these conventional programs which can also be charaterized as 'school based' are compositions such as the Panjarnata Mahakala of the Sakyas where the central Mahakala is accompanied by secondary figures which include all of the principal Sakya protector deities regardless of their textual origination or relationship to the central Panjaranata Mahakala. Likewise for the Gelug compositions of Vajrabhairava accompanied by all of the principal Gelug protector deities including worldly Tibetan gods. With many of the Vajrabhairava compositions the surrounding deities, except for a possible Manjushri at the top center and Yama Dharmaraja at the bottom, all of the others are random protector deities gathered from many different tantric systems, but inclusive to the Gelug school. The individual schools such as the Nyingma, Sakya, various Kagyu lineages and Gelug tradition played the largest role in developing individual 'school based' or conventional iconographic programs.

Individual/Personal: An individual (desire) program iconographic composition is where the majority of figures in the composition are random and unrelated to each other. The figures are selected and chosen by the artist or donor/commissioner of the painting. Most often the figures are favourite meditational deities along with a variety of power, wealth, long life and protector deities. Example HAR #347. 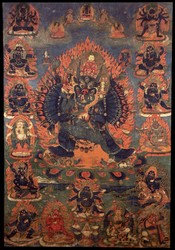 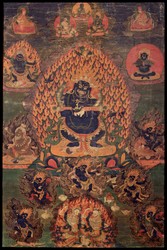 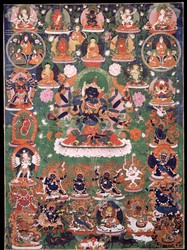 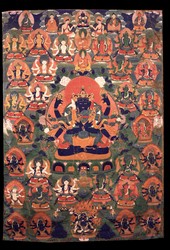 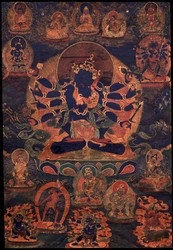 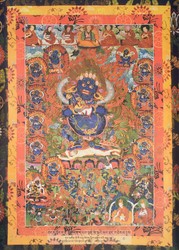 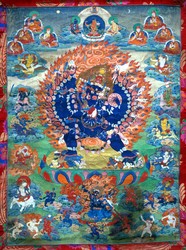 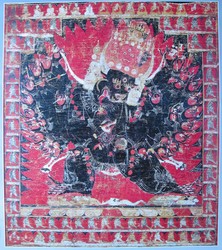 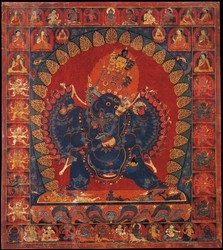