There are many different types of female forms depicted in art. The most well known are the beautiful and youthful types such as Tara and Sarasvati. Female and male figures of this type are referred to as having 'Peaceful Appearance.' It can often be very difficult to distinguish the male from the female forms as both are portrayed as sixteen years of age, like gods and goddesses, wearing similar heavenly clothing and ornaments, and in the bloom of youth. The key to differentiating the two genders is to take note of the face and hairline. The female face is oval. The male face has a horizontal hairline making the face appear more square in shape.Vajrayogini & Deities
Meditational Deity
Beijing, 19th Century
D518 (HAR 83418)

The three female deities framed by circles of fire are mostly naked except for ornaments of bone. The blue figure has a lion head rather than a human face. The two red figures have oval faces while the wrathful red deity below has a horizontal straight hairline and a different style of flames surrounding the body. The three female figures have a Semi-peaceful Appearance while the male figure below has Wrathful Appearance.

A complex composition with many figures is easy to read by first starting with the largest figure usually at the center and then moving to the upper composition and reading from the top of the painting to the bottom. The intention of this form of composition is to depict a particular figure along with the entirety of the related secondary figures all contained within one painting.

Vajrayogini can be depicted in a solitary aspect against a simple background, as in painting D518, or within her palace in an idealized pureland. There is some attempt by the artist to give the illusion of perspective in this composition. The two inter connected red triangles are a two-dimensional representation of a double three-dimensional geometric tetrahedron that functions as the dais or throne of Vajrayogini.

Female forms can be of any colour and are only dependent on the mood and function of the deity. The colour white is associated with calm, quiet, peaceful work and activities. White Tara is regarded as a deity that helps to prolong life and promote good health. She is a typical example of Peaceful Appearance in Himalayan style art.

Dark in colour, fierce in demeanour, with an angry expression, Shri Devi conveys the emotion of intense and immediate feelings like a mother caring for an only child that is in imminent danger. The four surrounding figures are known as the Queens of the Seasons, spring, summer, fall and winter, indicating directly that Shri Devi is always watchful throughout the four seasons of the year. [The hand prints on the back of the painting belong to Lobzang Palden Yeshe, the 2nd Panchen Lama].

Marichi is a goddess of light, the personification of the dawn, light once again entering the world and banishing darkness. Her function is to remove obstacles and create auspicious and harmonious circumstances. In her right and left hands she holds a needle and thread. These are common household objects and are employed in the same way except here Marichi takes all of the potential problems and obstacles and sews them into a bag and disposes of them. Likewise with ill intentioned speech and harmful imprecations Marichi sews the lips and eyes closed of those harm bringers and gossip mongers. She is like a mother always watchful for the safety of her children. 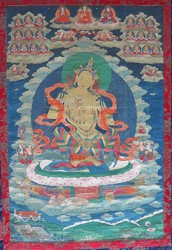 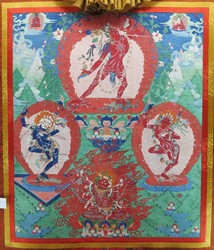 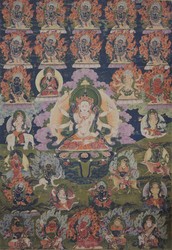 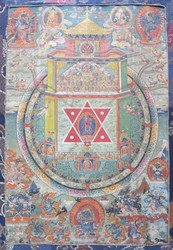 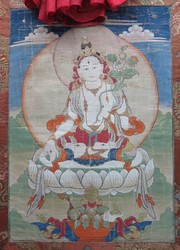 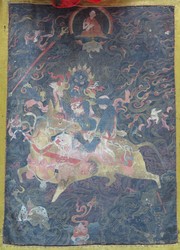