The Five Pehar Gyalpo Ku Nga (Kings) of the Terma (Treasure) Lineage of the Nyingma tradition of Tibetan Buddhism are worldly protector deities. One individual deity from the five, Pehar, is the principal deity aspect and appears in five different forms representing body, speech, mind, quality and activity. Each of the five has a different appearance. The most common form to appear in art is Activity Pehar with three faces, six arms, white in colour, and riding a lion.

"In former times at Glorious Red Rock,
Acharya Padmasambhava, inviting the profound vast protector,
Had bound by an oath as the entrusted steward of all Dharma Establishments;
To Pehar I bow." (Nyingma liturgical verse).

Pehar is believed to be a non-Tibetan spirit subjugated by Guru Rinpoche and bound by an oath to protect all the Buddhist temples and monasteries of Tibet. Other stories relate how Pehar was a local protector in the northern regions of Bata-Hor, conquered by Tri Songtsen Gampo, and brought back to Tibet hidden in the horde of plundered wealth. This group of five Pehar figures, originally belonging to the Nyingma 'Revealed Treasure' Tradition, was later incorporated into the Gelugpa School at the time of the 5th Dalai Lama, and can be found in other Tibetan Buddhist schools depending on the preferences of individual monasteries. Some traditions claim that, like the Direction King Vaishravana, Pehar Gyalpo Ku Nga has attained the 10th level Bodhisattva ground - a Mahayana level of attainment - immediately preceding the full enlightenment of a Buddha.

Gyajin is one of the Five forms of Gyalpo Pehar. He represents the mind aspect and is typically depicted as blue in colour and riding an elephant. From among the group of five forms the Activity Pehar is the form most commonly found portrayed as the central figure in paintings and commonly found as a sculpture. Gyajin is the only other form to be commonly depicted as the center of the group of five. Sometimes sets of five compositions are painted - one composition for each of the five Pehar forms. 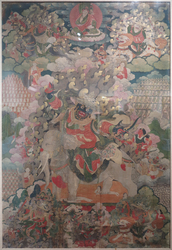 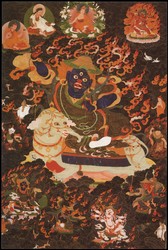 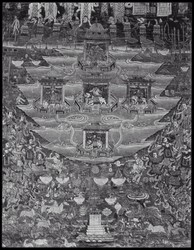 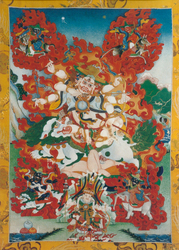 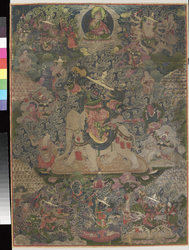 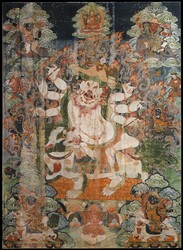 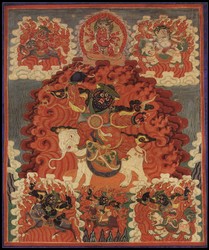 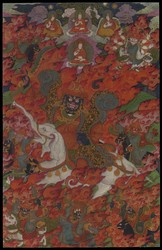 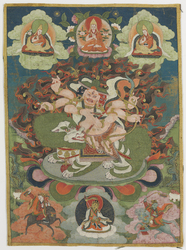 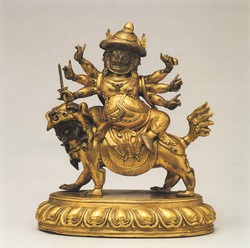 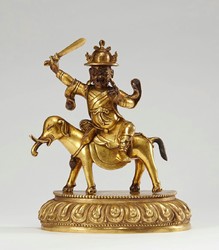 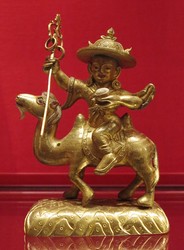