The name Rahula belongs to three important figures in Buddhist iconography. The (1) first use is as the proper name for the biological son, Rahula, of Gautama - Shakyamuni Buddha. The (2) second use of the name is for the Indian cosmological deity Rahu, the deification of the phenomenon of an eclipse. The (3) third use of Rahula is for the horrific Nyingma protector deity, wrathful, with nine heads and a giant face on the belly. It is likely that the depiction of this Buddhist protector is a Tibetan creation and not linked to any Sanskrit literature or Indian religious tradition. Aside from these three uses of the name there were also numerous Indian pandits and siddhas with the name Rahula, Rahula Bhadra, Rahula Gupta, etc. (See the Rahula Outline Page).

Rahula (Tibetan: kyab jug): is one of the 'Three Treasure Protectors' of the Nyingma School of Tibetan Buddhism. The Tibetan protector deity is based on the Indian deity Rahula, an ancient Indian god, a demi-god, of the cosmos, related to the eclipse of the sun, moon and other planets. In the ancient tradition of Tibetan Buddhism (Nyingma) Rahula became popular as a protector of the 'revealed treasure' teachings (terma). In Buddhist depictions he is portrayed with the lower body of a coiled serpent spirit (naga) and the upper body with four arms, nine heads, adorned with a thousand eyes. In the middle of the stomach is one large wrathful face. The face in the stomach, belly, is actually the face and head of Rahula. The nine stacked heads depicted above are the nine planets that Rahula has eclipsed, or rather literally swallowed, eaten and now symbolically appear on top of his own face and insatiable mouth. At the crown of the stack of all the heads is the head of a black raven.

Although sometimes found in various Kagyu Schools and occasionally in the Gelug especially when associated with a particular Nyingma 'Terma' adopted by that tradition. Generally speaking the protector deity Rahula remains essentially a Nyingma Tradition practice associated with the Revealed Treasure Tradition and not commonly found in most of the other Tibetan Buddhist Schools. Rahula in the Nyingma form as a protector is almost unheard of in the Sakya Tradition and related schools. 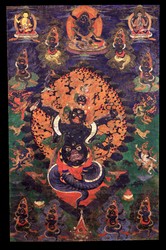 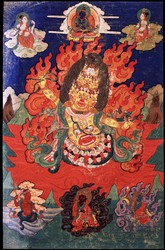 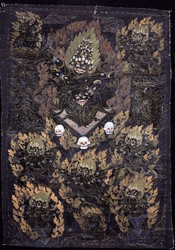 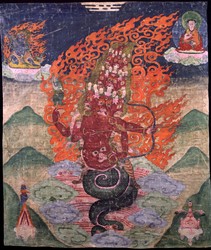 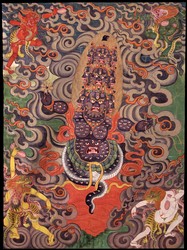 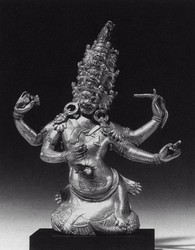 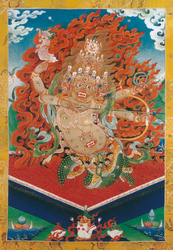 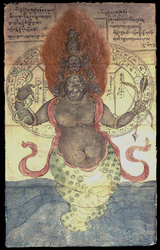 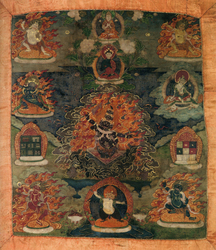 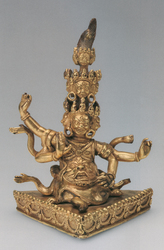 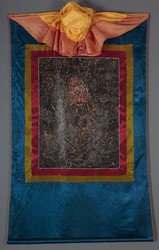 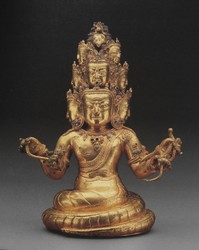