So far there are no known or identified works by the artist Chi'u Gangpa. There are no identified murals, no scroll works, and no inscriptions.

The 20th century Tibetan scholar Shakabpa suggests that Gyantse art is based on the art style of an artist named Chi'u. He further suggests that Chi'u lived in the 13th century but later contradicts himself by saying that the artist also painted a mural in the 15th century Palkor Chode Monastery, Gyantse.

The painting below of Damchen Garwa Nagpo, by the artist Choying Dorje, is said to be in a Chi'u art style according to the writings related to the biography and artistic output of Choying Dorje. It is not clear or immediately obvious which aspects and elements of the composition are in a Chi'u style. 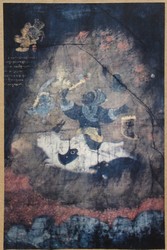