The Zhiguan Museum has three sculptural pieces that are either associated with the Choying Dorje atelier or greater story. The first is a Tara which is also associated with several other almost identical examples. The second is of a currently unidentified inscribed deity figure sometimes referred to as Vajrapani. The third is a Swat Valley style Lokeshvara also with an inscription. In both instances the inscription reads that the two works were created by the hand of Choying Dorje, the 10th Karmapa (1604-1674). 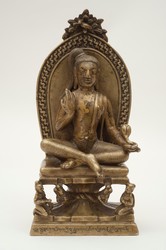