Dorje Rabtenma, (English: the Vajra Stable One), belonging to the iconographic category of Shri Devi. This form of Shri Devi originates from the Nyingma Tradition of Tibetan Buddhism. Dorje Rabtenma is commonly found as the protector deity in the bottom registers of paintings belonging to the schools originating with the Pagdru Kagyu of Pagmodrubpa. Subsequently the deity was predominantly practiced in the Shalupa and Tsarpa sub-schools of the Sakya Tradition.

Fearsome in expression, maroon or black in colour, she has one face, three eyes, bared fangs and yellow hair flowing upward. The right hand holds aloft a flaming sword and the left to the hip clutches a jewel-spitting mongoose bringing forth a stream of variously coloured gems. With some forms she holds a skullcup with the mongoose balanced on the forearm. Crowned with a tiara of five white skulls, gold earrings, bone ornaments and snakes, and a long white snake necklace, she is adorned with a garland of severed heads - pink, green and blue. At the navel, emblazoned below flaccid hanging breasts is an emanating golden sun and above the head a white circle of the full moon. She wears across the shoulders an upper garment of a human skin and elephant hide. With the two feet shackled in iron chains, she sits atop a human skin saddle on a mule, above a sea of churning blood awash with human and animal corpses, completely surrounded by dark smoke and the red licks of flame of pristine awareness.

"Goddess Dorje Rabtenma, Great One, with a body maroon in colour, one face, two hands and three eyes; the body is covered by a human skin. Held in the right hand is a blazing sword; a mongoose grasped in the left, riding atop a three-legged mule." (Shalu Liturgical verse by Shakya Gelong Rinchen Namgyal).

Dorje Rabtenma was the special protector of Shalu Monastery famous for the teacher Buton Rinchen Drub Tamche Kyenpa (1290-1364) the founder of the Bulug-Shalu sub-school of the Sakya tradition of Tibetan Buddhism. Alternately, a very similar form of the deity is found in the Bon (Sarma) Religion and called Machig Lhamo. The mongoose is absent from this Bon iconographic form. 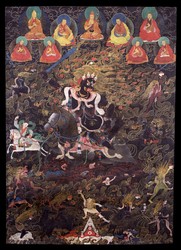 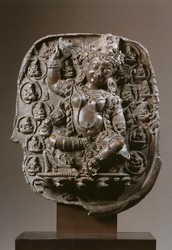 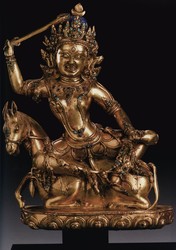 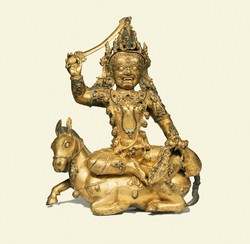 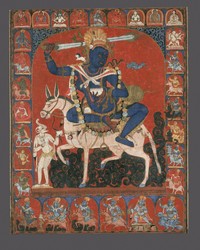 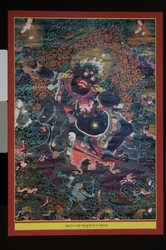 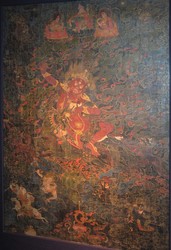 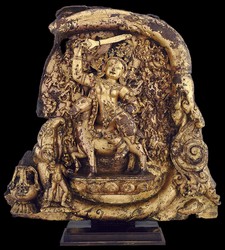 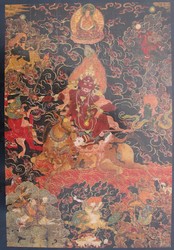