Medicine Buddha can be placed in a number of different compositions in painting and sculpture. He can be depicted alone or with his seven accompanying Buddhas (included is Shakyamuni - known as the Eight Medicine Buddha Brothers [Block Print Set]). Bhaishajyaguru can be depicted at the center of a Fifty-one Deity Mandala (see list of deity figures), or he can be relegated to a side position while the female personification of wisdom, Prajnaparamita, occupies the central position of the Medicine Buddha mandala. Sets of paintings can be commissioned depicting the Eight Medicine Buddha Brothers, or sets of paintings can be created depicting each of the fifty-one deities in their own composition. Often these sets are done with the painted canvas relatively small. In China they are commonly created as embroidered sets. They are then strung together and hung as a complete set in a temple or meeting hall. Likewise, sets of sculpture composed of fifty-one figures were also created and then arranged on a temple shrine. Many of the figures making up the fifty-one deities, when viewed individually and out of context with the whole, are often mis-identified and mistaken for other deities. The Twelve Yakshas Generals in the outer ring of the Medicine Buddha Mandala are most often mistakenly identified as forms of Jambhala, or even the more erroneous Kubera. (See Medicine Buddha Outline Page). 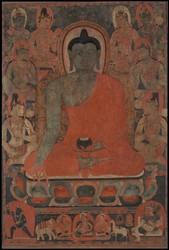 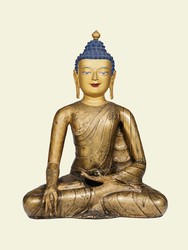 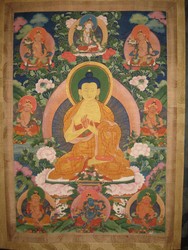