- Video: A Question on Depictions of Jewels

There are three principal uses for jewels in paintings. The first use is as an [1] element of decoration for thrones or throne backs (torana). The second use is as a [2] hand attribute for deities or teachers. The third use is as an [3] offering placed in a composition.

As an element of decoration they are based on the Three Jewels and the Seven Jewels of Royal Power from where the wish-fulfilling jewel is found. The jewel as a hand attribute is most commonly found with Wealth Deities.

The jewel, or a group of jewels, used as an offering in composition is first seen in Khyenri style paintings of the 16th century where the jewels are placed on a plate or in a bowl on a table in front of the central figure of the composition (see 16th century examples). A large sampling of the examples add a large canopy of light enclosing and framing the jewel offering. In some other rare occurrences there are jewels scattered in the foreground.

The reason that objects like jewels came to be used to decorate paintings, especially in the 17th through 20th centuries, is a natural development with the decline in popularity of Register Composition paintings. The growing popularity with Floating Figure Compositions and the open space for sky and landscape that was provided create the physical space on the canvas for creativity and innovation.

Jewels placed in compositions are generally found with peaceful deities, elders or paintings of teachers. Wrathful deities have their own specialized objects known as 'wrathful offerings.'

The 17th century artist Choying Dorje, based on a survey of 17th century paintings, appears to be the principal promoter of placing piles of jewels in the lower foreground of a painted composition (see examples). In the 18th century, Palpung Monastery style compositions included rows of jewels along with other precious objects in the foreground (see White Tara examples). The main characteristic of Choying Dorje's jewels are to stack them in overflowing piles and heaps. The Palpung characteristic is to lay them out neatly and moderately in horizontal rows.

The placing of contained or scattered jewels in the foreground does not appear to be an element of 15th century Yongle style or Chinese Buddhist paintings in general. 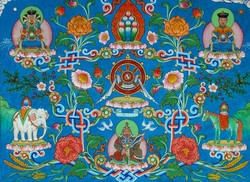 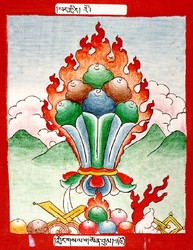 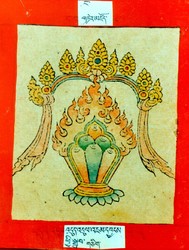 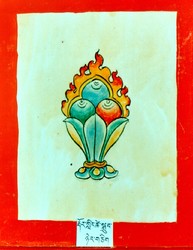 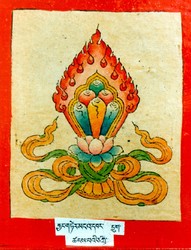 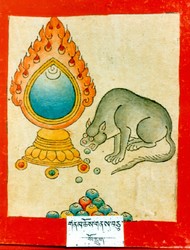