Originally in Tantric Buddhism there was public art and private art. The public art was created by any skilled artists and the completed works intended for public viewing. Private art was created by a Tantric practitioner and related to the forms of deities and the esoteric practices undertaken. Many of the tantric texts have chapters explaining how to create a proper image. Artists did not go into retreat for months prior to painting a composition. It was the opposite where a tantric composition was required to be painted prior to the beginning of a short or extended retreat.

In Tibetan history it is the great religious teachers who are mostly recorded as being great artists. Sakya Pandita was known for murals at both Sakya and Samye monasteries. Khyentse Chenmo, founder of the Khyenri style of painting, was a monastic. Manthangpa, founder of the Meri style, was a layman and his tradition continued down through his son and family.

A number of the Karmapa incarnate teachers were painters and sculptors with Choying Dorje as the most well known. The Drugpa Kagyu tradition of Kham was unusual in that they believed that proper religious training should include art and painting. The monastery of Khampa Gar produced many great painters and outstanding examples of Lhatog style which have survived into modern times. The artist and teacher Situ Panchen Chokyi Jungne was responsible in the 18th century for the revival of the Karma Gardri painting tradition. Women artists of the past have been poorly recorded and few examples exist. Research into this field is currently being carried out in the Qinghai (Amdo) area of Tibet where names and example works are said to be found.

There are a number of misconceptions concerning artists which primarily are about who they were, training and spiritual accomplishment. In Tibet artists were primarily lay people and belonged to family traditions of artists. Women could also learn to be an artist but often gave it up once married. It is also not true that artists were mere tools of the educated 'Lamas' and were told what to do in every instance. Master artists were extremely educated, well read, famous and prosperous. 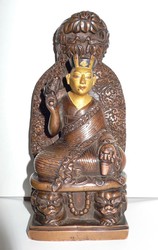