The images of paintings below are all related to an 18th century Drugpa Kagyu center named Khampa Gar, located near Lhatog, Kham, Tibet. This collection of painting styles can be referred to as Lhatog or Khampa Gar painting tradition. In the late 20th century it has been commonly miss-identified and mistaken for the so-called Karma Gar-ri, or 'new' karma Gar-ri style of Palpung Monastery.

The Lhatog tradition of painting is a sub group belonging to the larger body of Kham-ri tradition painting. Kham-ri is a very broad geographic term that attempts to identify the unique forms of painting and sculpture created in or by artists living in the Eastern Tibetan region known as Kham where and including shared common artistic elements most notable in the landscape.

The unique flavour of the Lhatog tradition of painting is the blending of 'new' Menri, Khyenri and the Kham-ri innovations of the artist and religious teacher Cho Tashi (early 18th century). The Karma Kagyu Tradition, from which the Karma Gar-ri tradition takes its name, according to Jamgon Kongtrul, claims Cho Tashi as one of their famous 'Three Tashis". Three artists each with the name Tashi were popularized in the writings of Jamgon Kongtrul in the late 19th century. However, this inclusion of Cho Tashi into the fold of the Karma Gar-ri is rejected by the Drugpa Kagyu master artists of Khampa Gar who maintain that Cho Tashi was unique and distinctly separate from the Karma Gar-ri tradition of painting and separate from the other two famous 'Tashi' artists.

The paintings gathered here reflect several different hands and sets. The Drugpa Kagyu Lineage set represented by a Rubin Museum of Art painting of Namka Palzang belongs to a set depicting the lineage teachers of that tradition of Tibetan Buddhism. The exact number in the set is currently unknown, but likely to be over twenty in number. Two other paintings from the same set have been identified in an Asian collection.

A mahasiddha painting represented by an MFA Boston work is comprised of four mahasiddha figures that belong to the famous Vajrasana system of the Eighty-four Mahasiddha. This set is comprised of a total of twenty-three compositions. Thirteen more paintings are found in the Museum of Culture in Basel, Switzerland. The arhat set of paintings, with three examples below, is from the Baylis Collection. The arhats belong to a set of twenty-three compositions depicting Shakyamuni Buddha and the Sixteen Arhats. A fourth painting from this set is also known.

The whereabouts of the other more than one hundred paintings in total belonging collectively to the sets mentioned above are currently unknown. 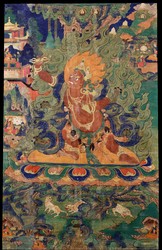 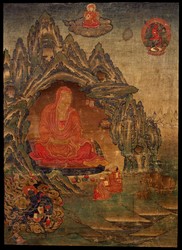 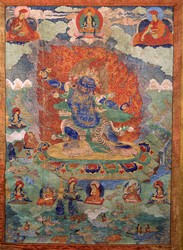 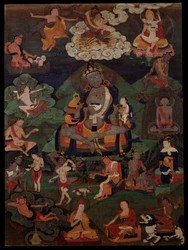 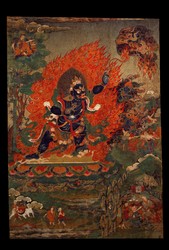 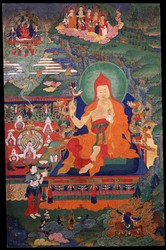 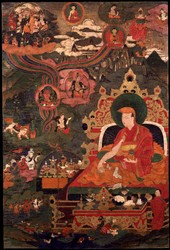 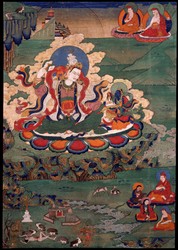 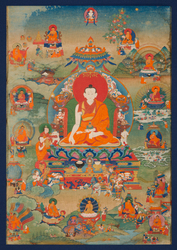 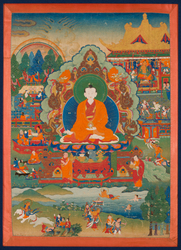 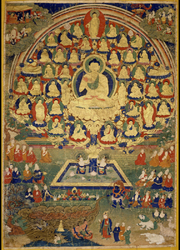