[26] Sita Tara: the three deity mandala of White Tara.
White Tara with four hands. The first two perform the utpala gesture. The lower right holds a wishing gem together with [the gesture of] supreme generosity. The lower left [holds] bunches of utpalas. [Having] the same ornaments, garments and seated posture. At the right on a moon is yellow Marichi, holding in the right [hand] a white yak-tail fan and in the left a branch of the ashoka tree. Wearing a red inner garment and a blue lower garment. At the left on a moon is green-yellow Maha Mayuri, holding in the right [hand] a yak-tail fan [and in] the left a peacock tail feather. Wearing various garments." (Bari Gyatsa).

[28] Sita Tara: White Tara Bestower of Life.
White Tara. The right [hand is in the gesture of] supreme generosity and the left holds an utpala. Radiating light like an autumn moon. The back supported by a moon. Seated in the vajrasana [posture]. [Having] the same ornaments and garments.

[78] Sukla Tara: Tara Showing Virtuous Action.
The Holy White Tara Showing Virtuous Action, with three faces and six hands. The main face is white, the right yellow and the left black. Each face has three eyes and bared fangs. The three right hands hold, the [gesture of] supreme generosity, a garland and an arrow. The three left, an utpala, lotus and bow. Wearing the hair as a crown. Having a crown of five dry human skulls [and] a half moon at the top of the head. Adorned with all ornaments [and] wearing a lower garment of tiger skin and supported at the back by a moon. Seated in the manner of a half [vajrasana] posture. (Extracted from the text 'A Lamp Removing Obscurations' by Ngorchen Konchog Lhundrub). 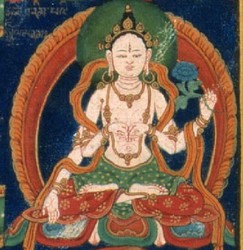 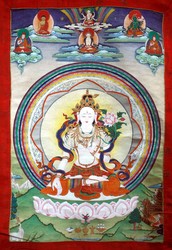 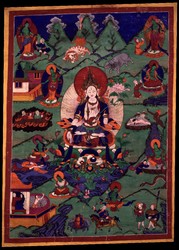