Nagas in relation to Buddhist tantra are described in the Manjushri-Mula-Kalpa Tantra where paintings and sculpture of depictions of the Buddha and other principal deities are adorned with two nagas placed next to the lotus stem of the cushion seat upon which the Buddha sits.

The Eight Great Nagas are the leaders of the different races of nagas. They are sometimes depicted as secondary figures in narrative paintings of Shakyamuni Buddha when giving teachings. The nagas can also appear as secondary figures in mandalas such as Vajrapani from the Sarvadurgati Tantra, Simhanada Lokeshvara and the stylized food offering (torma) for the rituals of Hevajra.

The Eight Nagas can also be found depicted as snake adornments on the body of Krodha Vajrapani and other wrathful deities. The nagas are envisioned as either passive or aggressive, subjugated or supportive, depending on the intention of specific ritual practices. Each of the eight have names, a consort, and associated colours in Tantric theory although there are a number of different and varying lists depending on the various Tantric literature.

For a figure such as Bhutadama Vajrapani, he is adorned with eight great nagas in the form of snakes. The first naga is small and blue, tied in a tuft of the hair at the top of the head. For the two earrings a pair of yellow nagas looped through the pierced ears and entwined to form a circle. For the short necklace a red naga, long necklace as a Brahmin’s cord – white, belt – white, bracelets on the two arms of the hands performing the demon subduing gesture at the heart – mercury coloured, bracelets on the arms extended to the sides – white, and finally for the ankles – red. Each of the nagas is marked with small black spots which are an indication of virulent poison.

(The images below are only a selection of examples from the Naga, Snakes & Serpents Page). 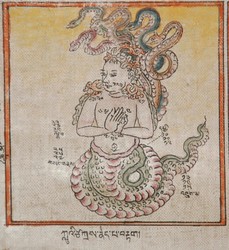 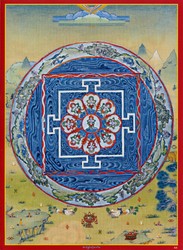 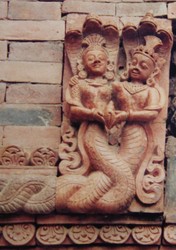