As a young king on the island of Shri Lanka, Luipa felt only contempt for his wealth and power. He made one attempt to escape the royal palace but was stopped by his brothers who bound him in golden chains. On his second attempt he succeeded in bribing his guards, then disguising himself in rags he fled for the country of Rameshvaram. He became a simple yogin, sleeping on a bed of ashes and eating only what was given to him in his begging bowl. Despite his meager conditions, he remained handsome and charming. When his travels brought him to Pataliputra he met a courtesan outside a house of pleasure who was an incarnate worldly Dakini. She told him that although he was quite spiritually advanced and pure, there was still a pea-sized obscuration of royal pride in his heart. She then poured some putrid rotten food into his begging bowl. When he thought she was gone, he threw the contents of the bowl into the gutter. The Dakini, who had secretly been watching him, appeared and scorned him. She stated that someone who truly wished to attain enlightenment would not be concerned with the purity of their food. Luipa was mortified and realized that his judgmental mind was still active and that he still viewed certain things as intrinsically more desirable than others, and that this was an obstacle on the path toward enlightenment. He decided his new meditation practice would be to live on the banks of the Ganges River and eat nothing but the entrails of fish that were left by local fisherman. He did this for twelve years and then achieved a level of realization, transforming the fish entrails into the nectar of pure awareness through the insight that that the nature of all things is emptiness. Luipa lived the rest of his days as a respected and revered teacher. 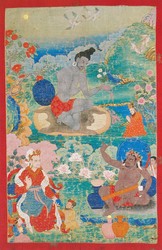 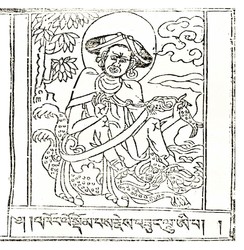 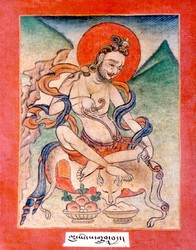