1. Simple Mode refers to a deity with a singe face and two arms. The mood can be peaceful, semi-peaceful/wrathful, or wrathful. Animal Featured can also be added to this mode category provided there is only a single face and two arms.

2. Complex Mode refers to deities with multiple faces and arms. They also have the three moods, or Animal Featured appearance.

3. Universal Mode refers to deities that have incredible and unimaginable numbers of faces, arms and legs. They also have the three moods, or Animal Featured appearance.

The three image examples below depict the female meditational deity Sitatapatra (White Parasol) in her two armed simple form, three-faced, eight-armed complex form, and in her universal form with a 1000 faces, arms and legs. 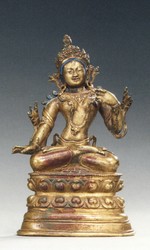 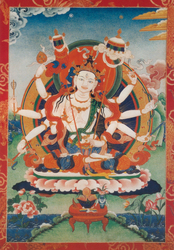 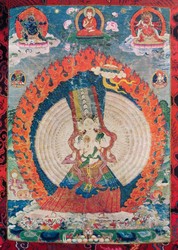