Guan Yu (died 220) is a Chinese General from the Eastern Han Dynaty that became deified and absorbed into folk Buddhism and Taoism. As a subject in Himalayan style art, he was primarily popularized in the 18th century by Changkya Rolpai Dorje (1717-1786).

General Guan Yu is typically depicted in a seated posture with the legs extended forward atop a tiger skin and traditional Chinese throne. A consort sits to his left side. She holds a vase adorned with a single peacock feather. Accompanying the couple, there are usually four horsemen wearing warrior attire.

Often at the top of each composition is a depiction of Changkya along with the Panchen and Dalai Lamas. Tsongkapa and other teachers can also be found with some later 19th century compositions. 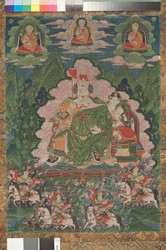 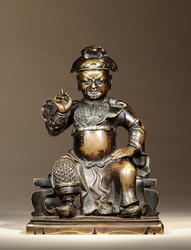 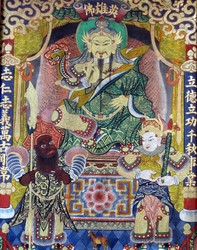 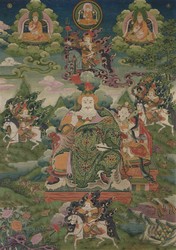 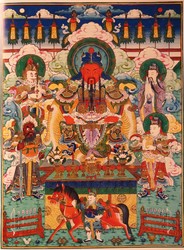