As a deity represented in art, Prajnaparamita is relatively minor with only a few variations of iconographic form. With regard to the different religious traditions of Tantric Buddhism, it is the Cho (Severance) founded by Machig Labdron and the Drigung Kagyu founded by Jigten Sumgon that place a special emphasis on Prajnaparamita and subsequently depict the deity in their paintings and sculpture.

In general Tantric Buddhist theory the three letters om, a and hum represent the body, speech and mind of an individual. The three letters serve symbolically as a bridge between the individual and the Tantric practice of meditation on the form of a deity - Deity Yoga.

In the Nyingma Tradition the letter 'A' is highly symbolic and closely related to the teachings of the philosophical view known as Dzogchen. A physical yet still symbolic manifestation of the principal of the 'A' is a clear quartz crystal rock. During specific Nyingma initiation rituals an initiation card displaying the letter 'A' will be shown next to a length of clear quartz crystal, or drawn together on a single initiation card. The letter 'A' as an object of meditation can also be found in the Mahamudra traditions of the Sakya and Kagyu Schools but rarely depicted in art. The Bon religion, like the Buddhist Nyingma, place a great deal of emphasis on their form of the Dzogchen philosophy and the Tibetan letter 'A.'

The [Sutra of the] Blessed Perfection of Wisdom, The Mother of All the Tathagatas, In One Letter

Homage to the Perfection of Wisdom!
Thus have I heard at one time. The Lord dwelt at Rajagrha, on the Vulture Peak, together with a large congregation of monks, with 1,250 monks, and with many hundreds of thousands of niyutas of kotis of Bodhisattvas. At that time the Lord addressed the Venerable Ananda, and said:

"Ananda, do receive, for the sake of the weal and happiness of all beings, this perfection of wisdom in one letter, A."

Thus spoke the Lord. The Venerable Ananda, the large congregation of monks, the assembly of the bodhisattvas, and the whole world with its gods, men, asuras and gandharvas rejoiced at the teaching of the Lord. 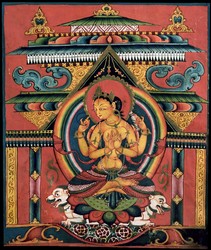