A Tale of Diligent Resolve.

Born into a noble family and possessing great fortune, the young bodhisattva grew to be a successful merchant. Eventually becoming the head of his guild, he acquired a large estate, earned deep respect from all who knew him, and even was honored by the king. Devoted to the precept of giving, he constantly shared his wealth with the less fortunate. It was impossible for him to witness any sort of suffering and refuse to offer aid. 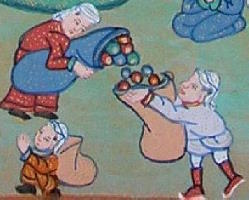 One day, while the bodhisattva was sitting down to partake of a magnificent feast, a seemingly poor and hungry man appeared at the front gate of his home. Although appearing as a beggar, this old man was actually a Pratyekabuddha whose only motive to receive alms was to increase the merit of the bodhisattva. 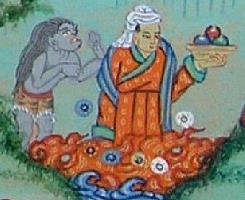 Witnessing this, Mara, the Wicked One, became intent on dissuading the Bodhisttva from all charitable actions. He created a deep hell several fathoms wide separating the bodhisattva's front gate and the mendicant. As the bodhisattva stood pondering the meaning of such a phenomenon, Mara appeared before him disguised as a powerful god. Mara attempted to convince the bodhisattva that what he saw before him was the hell of those lured by the praise of beggars. A hell realm solely for those who indulge in the vicious passion of charity, and who give away their hard earned wealth. The Bodhisattva however, knowing that anybody saying such things must be evil, boldly stepped into the fire. Lotuses suddenly appeared at his feet as he passed through. Upon reaching the other side he gave the food to the old man who, to show satisfaction, revealed his true form as a Pratyekabuddha and magically flew up into the air. Mara, disheartened and vanquished, disappeared along with his hell.

3. The merchant is unperturbed.