A Tale of Loving Kindness.

Being established in the practice of compassion, the bodhisattva was born as the beloved king Maitribala, which means 'strength of loving kindness'. Feeling the suffering of all his subjects, he ruled his people skillfully. Other kings held him in high regard and respected his word as law, so wars were never fought in his kingdom. He took great measures to promote his peoples welfare, ruled with right action, and even punishment of wrongdoers was done in such a skillful and compassionate way that it increased the fortunes of the entire kingdom.

One day however, five Yaksha demons, exiled by their lord, invaded Maitribala's lands. Skilled in sucking the life-force from others and bent on creating havoc, the demons were overjoyed to find such an idyllic kingdom to destroy. Yet all their attempts were unsuccessful and they did not know why. Disguising themselves as Brahmans they questioned a cowherder and learned of the glory of Maitribala. This great king was surely the reason their efforts to spread suffering were unsuccessful so they set off to the palace to create trouble. 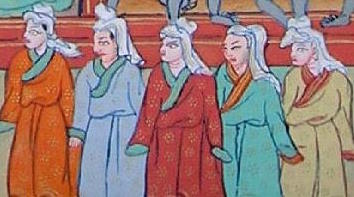 Upon arriving in their Brahman disguises, the demons approached the king who was in the midst of addressing a grand audience. They stated that they were hungry and immediately the king ordered a great feast to be prepared for them. Yet when the elaborate meal was served, the demons scorned it and angrily exclaimed that they did not eat such dishes. The king then asked what sort of food would please them and seeing this as an opportunity, the Yakshas revealed their true demonic form. Their reply was that they needed to eat fresh human flesh and blood. The king, unable to refuse a request even from demons, but also not able to kill any of his subjects to feed them, found himself stuck in a serious dilemma.

He then resolved that the only possible action was to feed the demons his own flesh and blood, despite his royal court imploring him not to. In fact, the sorrow over what the king was about to do was so great that the earth began to tremble and shake in many places. Never the less, Maitribala had his physicians open five of his veins and began to serve his fresh blood to the Yakshas. He proceeded to cut off chunks of his flesh and felt very little pain as he did so, for the joy of generosity overwhelmed the sharp physical sensation. Seeing this, the five Yaksha demons became awestruck with admiration and astonishment. All the anger and ill intent they had been nurturing vanished and they bowed in reverence to the great king, eventually taking vows themselves to follow right action. 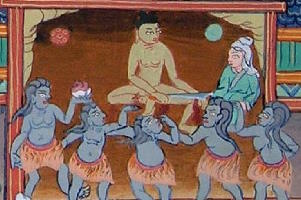 Shakra, the Lord of Gods, having witnessed the great rumbling of the earth, arrived at the royal palace to find everybody filled with fear and sorrow, crying for the newly disfigured king. The king himself, although in the process of bleeding to death, was the only one that remained calm and clear. Seeing Maitribalas infinite compassion, Shakra then rewarded the king by gathering herbs from both heaven and earth and applying them to his wounds. In very little time, the kings pain ceased and his body was restored to its wholeness.